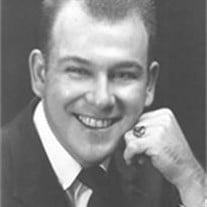 Harland Lamont Hoffman passed from this life on February 18, 2012 after a brief illness in Tulsa, Oklahoma. He was born January 19, 1929 to Elmer and Carmen Hoffman in Lyons, Kansas. He was a member of the First Presbyterian Church, Tulsa, Oklahoma.Â Harland served his country as a Sergeant in the United States Marine Corp from 1951 to 1953. He was a veteran of the Korean War, serving as a Radio/Telegraph Operator. He received an Honorable Discharge from active duty in August 1953.Â  Before serving his country he attended Fort Hayes Kansas State University obtaining a Bachelors of Arts Degree. After he returned from active duty he continued his education at Fort Hayes Kansas State University obtaining a Master of Science in 1955. In 1971 he received a Doctor of Education from the University of Nebraska in Lincoln, Nebraska. Â  Harland taught 71/2 years at the Hoisington High School in Hoisington, Kansas. He then taught at the University of Nebraska at Kearney, in Kearney, Nebraska for 30 years as a Professor of English. Ten of those years he served as the Chairman of the English Department in Kearney, Nebraska. He loved to teach and to learn, which he did every day of his life. Upon retiring he and his wife moved to Tulsa, Oklahoma where Harland became very active with the Gilcrease Museum, by joining the Gillies, a volunteer organization for the museum. He served as a Docent, and held many offices and in 2003-2004 he held the honor of being the first man to ever be elected President to the Gillies. Â  He is survived by his wife, Janis Hoffman of the home, one son, Lamont Hoffman and his wife Shari of Mansfield, Texas, one brother, John Hoffman and his wife Karen of Overland Park, Kansas, a sister-in-law, Jane Nixon and her husband Jerry of Tulsa, Oklahoma, 4 nephews, Shawn Hoffman, Tyson Hoffman, both of Olathe, Kansas, Mark Nixon and wife Debbie of Clearwater, Florida, Greg Nixon and wife Angela of Tulsa, Oklahoma, 1 niece, Lorelle Eller and husband Steve of Overland Park, Kansas, and many, many friends. Â  A memorial service will be held at the Chapel at Floral Haven Funeral Home in Broken Arrow, on Wednesday, February 22, at 12:30pm. A reception is to follow at the Floral Haven Family Center on the Floral Haven grounds. The family wishes in lieu of flowers, in remembrance of Harland that a contribution, of those wishing to do so, be made to the Gillies Organization, Attn: Charley Wyatt, President, Thomas Gilcrease Institute, 1400 Gilcrease Museum Road, Tulsa, Oklahoma. Floral Haven 918.252.2518

Harland Lamont Hoffman passed from this life on February 18, 2012 after a brief illness in Tulsa, Oklahoma. He was born January 19, 1929 to Elmer and Carmen Hoffman in Lyons, Kansas. He was a member of the First Presbyterian Church, Tulsa, Oklahoma.Â Harland... View Obituary & Service Information

The family of Harland Hoffman created this Life Tributes page to make it easy to share your memories.

Harland Lamont Hoffman passed from this life on February 18,...