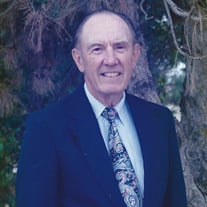 Harold Dean Derks was born July 27, 1935, to Ross Derks, a blacksmith, and his wife Ethel. He was delivered by a midwife in an upstairs bedroom at their Mountain View, Missouri home. His mother passed when he was three and his father later married Betty who raised Dean and his 7 siblings: Ruby Esther, Delmar Ross, Kenneth Lee, Gerald Jerome, Maynard Buell, and Ethel Viola. Dean shared fond memories of growing up: sliding down the stairs on an ironing board, being a prankster, going to the local movie theater, fishing, and playing four sports. Money was short and winters in the house were cold – ice on the windows and water freezing in glasses. The kids hitchhiked to Jack’s Fork River, walked a mile to attend church – ten miles in the snow – bathed in a galvanized tub on the kitchen floor with fire-heated water, and wore the same jeans and feed sack shirts to school. Dean worked at the local theater at age fourteen and for his father who paid him 10 cents per rack of stacked wood. He was able to save up for his first car, a 1937 Chevy, for $150. In 1953, at age eighteen, Dean moved to California to attend Compton College and received an Associate Degree. He then attended Northwestern University in Chicago to receive a degree in Financial Public Relations before returning to Missouri to work at the Bank of Mountain View. He courted Darlene Marie Brown for two years and married her on his birthday, July 27, 1957. Their first child was Douglas Dean in 1958 followed by Mona Kay in 1962. Dean continued to work at the Mountain View bank and was active in Community Betterment, while playing recreational baseball, raising the kids, summers at the river cabin, and fixing up a beautiful, rock house. In 1966, Dean moved his family to Stover, Missouri. As President of Farmer’s Bank of Stover, he built a new house, started an insurance agency, and dabbled in real estate. During that time, he developed a love for hunting quail and playing golf. As a Scoutmaster, Dean took scouts camping, hiking, fishing, and the occasional snipe hunting. He stayed busy following his children’s sports and school activities and could always be found in the stands. Dean would say he is most proud of his children. In 1983, Dean went for donuts when he met Shirlye Lee Nevius. Their brief encounter, after Dean cleaned out the donut supply, was the start of their very special love story. They married on February 10, 1990, and eventually moved to Nevada, Missouri where Dean ran several banks and started a travel agency. In Nevada, they entertained groups of friends, organized quail hunting excursions, and were active in the community and church. They enjoyed season tickets to the Royals baseball games and dinner theater in Kansas City. In 1997, Dean retired, and they moved to Broken Arrow OK. An avid golfer for years, and according to him, he shot his age or better a few times. They both enjoyed the Indian Springs Country Club playing golf, having coffee, dinners, and socializing with their friends. They were active members of Indian Springs Baptist Church where Dean was saved on April 27, 2014. In the past few years, Dean enjoyed keeping up with the Greenwood Bulldogs, his grandson, Kevin, who plays professional disc golf, the Mizzou Tigers, the Oklahoma Thunder, and the Kansas City Chiefs. Dean is survived by Shirlye, his wife of 32 years, his children Doug Derks (Pam) Osage Beach MO, Mona Derks Jones (Rick) Springfield MO, Shirlye’s children Scott Nevius (Sue) Valencia CA, Patricia Nevius Oak Grove MO, Lanette Mullan Plainfield IL, Dawn Fulton (Gregg) Livermore CA, Freddie Nevius Lebanon MO, and 26 grandchildren and great-grandchildren. The visitation will be 4:00 PM to 6:00 PM, Friday, May 13th, at Floral Haven Funeral Home. Funeral services will take place at 12:30 p.m. on Saturday, May 14, 2022 at Floral Haven's Funeral Home Chapel. Burial will be scheduled at a later date.

Harold Dean Derks was born July 27, 1935, to Ross Derks, a blacksmith, and his wife Ethel. He was delivered by a midwife in an upstairs bedroom at their Mountain View, Missouri home. His mother passed when he was three and his father later married... View Obituary & Service Information

The family of Harold Dean Derks created this Life Tributes page to make it easy to share your memories.

Send flowers to the Derks family.