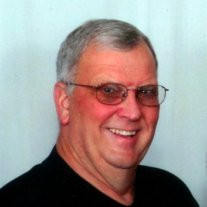 HAROLD ERWIN GORDON â?? LIFE HISTORYHarold Erwin Gordon born on June 1, 1945 in Tulsa, Oklahoma, went home to be with our Lord on March 24, 2013 at his home in Broken Arrow.He grew up in Tulsa, attending Sequoyah Elementary and Cleveland Junior High Schools. He graduated from Tulsa Rogers High School in 1963. He also graduated from Oklahoma State (â??Okmulgeeâ?) Tech in 1965 with and Associates Degree in Drafting. He later attended the University of Tulsa taking a few courses to continue his education.After graduating from OSU Tech, Harold entered the military, drafted into the U.S. Army. He served two years from 1966-1968 in Berlin as a draftsman, planning routes for motorcades among his varied responsibilities. Along with his honorable discharge, Harold also received a National Defense Service Medal, a Army Occupation (Berlin) Medal, and a Good Conduct Medal.In 1965, Harold went to work for Cooling Products, Inc.â??his â??work family.â? He started as a draftsman constructing drawings for the various heat exchanger units made by the company. At the time of his death, he was the Quality Control and Purchasing Manager. He invested almost 48 years with this wonderful company.In 1965 Harold was introduced to the lady who became the love of his life, Patsy Davis. They dated all through his time in the Army and were married August 16, 1968. Over the past 44 years they have weathered the storms and enjoyed the many celebrations of this life together.In 1970, our Lord added to their home the first of two sons, Scott. In 1974, their second son, Kevin, was born. Harold, along with Patsy, instilled a deep sense of respect and love for others, our nation, their family, and a deep faith in our Lord and the truth of His word. Today, these boys carry on the name and legacy given to them by their father. They have married two wonderful women and God has blessed them with the five grandchildren Harold has loved so much.Harold has lived in the assurance of an unshakeable faith in Jesus Christ, his Savior and Lord. Having invested his life in various churches, he was most recently involved as a member of Southwood Baptist Church in Tulsa.Throughout his life Haroldâ??s foremost â??hobbyâ?? has involved cars. He enjoyed racingâ??watchingâ?¦mostlyâ??including dirt-track, Indy cars, and NASCAR! More than watching racing he loved working on cars, especially his Black Cherry 1968 Chevelle 300 Deluxe Coupe. But above all that he loved his family most of all. He served as leader in both Cub and Boy Scouts with his sonsâ?¦also having the privilege of seeing them achieve the rank of Eagle Scout. He also coached soccer, was involved in baseball, and enjoyed attending the sporting and other activities of his grand children.Over the last four weeks of his life, Harold lived with the challenge of pancreatic cancer. While this disease ended his earthly life, he now lives in the hope of his eternal rewardâ?¦and we are all the beneficiaries of his influence and involvement in our lives.Harold was preceded in death by his parents Lester and Viva Gordon, and his brother Arthur Vickers.Harold is survived by his wife, Patsy of Broken Arrow, Oklahoma; his sons, Scott Gordon and his wife Rhonda, of Liberty, Missouri, and Kevin Gordon and his wife Jennifer of Las Vegas, Nevada; his granddaughter, Myah Gordon of Las Vegas; his grandsons, Logan and Jay Gordon of Liberty, and Eli and Ethan Gordon of Las Vegas; his sisters-in-law, Kay Born and her husband Charles of Humble, Texas, and Anne Clague and her husband John of Lawton, Oklahoma; as well as numerous nieces, nephews, cousins, other relatives, and many, many friends.

HAROLD ERWIN GORDON â?? LIFE HISTORYHarold Erwin Gordon born on June 1, 1945 in Tulsa, Oklahoma, went home to be with our Lord on March 24, 2013 at his home in Broken Arrow.He grew up in Tulsa, attending Sequoyah Elementary and Cleveland Junior... View Obituary & Service Information

The family of Harold E. Gordon created this Life Tributes page to make it easy to share your memories.