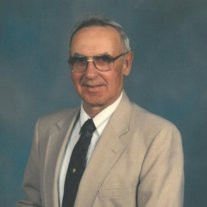 Harold Leroy Martin, of Broken Arrow, OK, passed away June 6, 2013 at the age of 81. He was born on January 15, 1932 in Tribune, Kansas to James and Joyce (Gladys) Journey Martin. Harold grew up on a farm and attended high school in Tribune, late attending Garden City Juco and Kansas State, where he played football. He served in the U.S. Army from 1953-1955 and fought during the Korean War. He was awarded both a National Defense Service and Good Conduct Medals during his honorable service to our country. Harold married the love of his life, Josephine Ann Carothers on December 23, 1972 in McPherson, KS. They enjoyed 39 years together until her passing on May 4, 2011. Harold was a talented engineer. He went to work for Dresser Engineering in Tulsa and spent 25 years with the company before starting McPherson Energy Company in McPherson, KS. He later became a partner with ProQuip Corporation in Tulsa and worked there until his retirement. In 1990, Harold was installing natural gas pumping plants when Desert Shield, an Iraqi invasion, began on Aug.2, 1990. He was considered a hostage along with 18 other U.S. Civilians. In November, just prior to Thanksgiving, Mohammed Ali negotiated their release with the Iraqi government. This had a profound impact on Haroldâ??s life. Harold was a member of the First United Methodist Church in Broken Arrow, where he and Jo were both very active with mission work, particularly V.I.M. They took part in 52 different mission trips around the world and touched the lives of many people. Harold enjoyed taking trips with Jo to Branson and Silver Dollar City, woodworking in his shop, spending time with his children and grandchildren, and relaxing in his easy chair. He was a generous man who gave all he had and his love of God and his family were unmeasurable. He was loved by all who knew him and will be truly missed. He was preceded in death by his loving wife, Josephine; his parents, James and Gladys Martin; two brothers, a sister-in-law; son, Charles E. Carothers; and granddaughter, Crystal Carothers. He is survived by son, Douglas Martin; daughters, Debra Martin, Michelle Heuszel, and Laurie Jones; grandchildren, Amy, Jennifer, Charity, Michelle, April, Brian, Tim, Zachary, Amanda, Alex, Nikki, and 15 great-grandchildren. A Celebration of his life will be held Wednesday, June 12, 2013 at 1:00 PM at First United Methodist Church in Broken Arrow, OK. Visitation will be Tuesday, June 11, 2013 from 12:00-8:00 PM, with family present from 6:00-8:00 PM at Floral Haven Funeral Home, Broken Arrow, OK. Memorials may be made in Haroldâ??s honor to the First United Methodist Church of Broken Arrow.

Harold Leroy Martin, of Broken Arrow, OK, passed away June 6, 2013 at the age of 81. He was born on January 15, 1932 in Tribune, Kansas to James and Joyce (Gladys) Journey Martin. Harold grew up on a farm and attended high school in Tribune,... View Obituary & Service Information

The family of Harold Leroy Martin created this Life Tributes page to make it easy to share your memories.