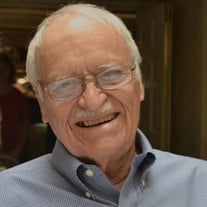 Harold Lee (Hal) Stratton, skilled physician, faithful friend, husband, father, and provider of exceptional advice to his many friends, children, and grandchildren, passed away on July 15, 2021 at the age of 90. Hal Stratton was born in Ellsinore, Missouri, the son of Dewey and Grace Stratton. He was the youngest of four brothers, James, Claude, and Dewey Jr., whom all preceded him in death. Hal graduated from Southeast Missouri State University with a bachelor’s degree in Chemistry, and obtained his Doctor of Medicine from the University of Missouri and Washington University Schools of Medicine before completing an internship in Surgery and a residency in Anesthesiology. He served in the Naval Reserve as a radioman for three years while in high school, and upon completion of his anesthesia residency he joined the United States Air Force as a Flight Surgeon. Following his honorable discharge from the Air Force in 1966, after almost 8 years of service, he began a long and rewarding career as an anesthesiologist with Anesthesia Associates, Inc. in Tulsa, Oklahoma until he retired. Throughout his life, he pursued numerous hobbies leading to many cherished memories with his family and friends. He was an early adopter of computers, and his love of flying complemented his spirit for adventure and travel. He, along with his wife MiCha, was an avid golfer and enjoyed sharing this hobby with his children and grandchildren. He is survived by his wife, MiCha, half-sister Glenda Alexander, his sons Harold Stratton Jr. and Douglas Stratton, daughters Cynthia Dutton and Allison Uhren, six grand children, and seven great grandchildren. In lieu of flowers donations may be made to the Clarehouse @ https://www.clarehouse.org/ Visitation will be 4-6 pm, Monday, July 19, 2021 at Floral Haven Funeral Home. Funeral Service will be 12:30 pm, Tuesday, July 20, 2021 at Floral Haven Funeral Home Chapel. To view webcasting of the service use the link below. http://webcast.funeralvue.com/events/viewer/57286/hash:5A3C4B589BD28413

Harold Lee (Hal) Stratton, skilled physician, faithful friend, husband, father, and provider of exceptional advice to his many friends, children, and grandchildren, passed away on July 15, 2021 at the age of 90. Hal Stratton was born in Ellsinore,... View Obituary & Service Information

The family of Harold Lee Stratton created this Life Tributes page to make it easy to share your memories.

Send flowers to the Stratton family.