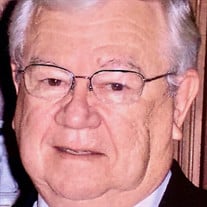 Harry Lee Harper was born on January 8th, 1936 in Tulsa, Oklahoma and the Lord’s angels took him peacefully on September 15, 2020 at home with his wife by his side. He will be greatly missed by all those who loved and cherished him. Harry graduated from Daniel Webster High School in 1954 and married Sammy Lou Jenkins, September 10, 1954. Harry and Sammy had 47 years of marriage until her passing in March of 2001. After high school, Harry proudly served in the United States Air Force, continuing technical education in the petroleum industry. He began his career as a Geological draftsman with Amerada Hess and quickly became Chief Draftsman before moving on to Williams Brothers Engineering in 1973. Once again, Harry’s technical skills moved him to Supervisor and he also coordinated the “new” computer systems including training other offices how to use the software. Harry’s pipeline designs and compressor stations span the United States from Minnesota to Texas. When the time came to ‘re-do” areas on their home in Mountain Manor, Harry quickly put his design skills to work and fashioned exactly what they needed and did much of the work himself. Harry also grew up with a love of music beginning with the Tulsa Boys choir and was featured in quartets and solos in Webster’s annual Talicade. He continued sharing his beautiful tenor voice with the Trinity Baptist Church choir and singing at weddings for many years. He was a peaceful man and follower of Christ, becoming a member of the Broken Arrow Church of Christ after marrying his 7th grade girlfriend, Mary Hanna-Cozort in 2005. Harry sang an Eddie Fisher song called “Thinking of You” at their wedding and continued to sing it until he was unable. Harry and Mary were able to have 15 years sharing their deep love for one another making sure to celebrate their anniversary each and every month on the 11th. Harry was such a blessing for Mary’s family in the joy and love he brought to their marriage. Harry spent many years as an avid OU Sooner fan watching and cheering them on along with his children and grandchildren. He also enjoyed spending as much time as possible fishing at the lake with his grandson, Chris, playing cards with granddaughter Casey, having rubber band fights with granddaughter Dallas and eating at their favorite restaurant, Choo-Choo’s. All 3 of his grandchildren listed “going to Braum’s” as a favorite memory. Harry was preceded in death by his parents, Truman Harper and Anna (Hall) Harper, wife of 47 years Sammy Jenkins Harper and sister, Phyllis Harper (Lucas) Girdner. He is survived by his loving wife, Mary Hanna Cozort-Harper, son, Russell Harper and wife Shannon of Glenpool, daughter, Valerie Harper-McCullough of Tulsa; grandchildren, Casey Harper and Jeff Smothers of Bixby, Chris Harper & wife Jessie of Glenpool and Dallas Harper & Andrew Kolb of Tulsa, Great Grandchildren, McClain & Max Masters of Bixby, Nolan and Shayne Harper of Glenpool. He is also survived by his brothers, Jimmy Harper of Tulsa and Jerry & Debra Harper of Skiatook and Mary’s children, Charissa Cozort & husband Doug Wakefield of Broken Arrow, Julie Parette & husband Mark of Coweta, Kara Guilloit & husband Steve of Plano, TX, and grandchildren Carly Campbell of Broken Arrow, Dylan Campbell of Broken Arrow, Britne Collins of Broken Arrow, Tyler Parette and wife Kendal of Tulsa, Abigail Parette of Tulsa, Elizabeth Van Meter of College Station, TX, Asher Van Meter of Brooklyn, NY, Rachel Van Meter of Plano, TX, Keaton Hughes of Broken Arrow, Bryce Collins of Broken Arrow and Liam Bonomi of Broken Arrow along with many nieces, nephews and friends. Visitation will be held from 2-4pm on Sunday, September 20th at Floral Haven, 6500 S. 129th E Ave., Broken Arrow, OK. Memorial service for family and friends will be held Monday, September 21st at 11am at the Broken Arrow Church of Christ, 505 E Kenosha, Broken Arrow, OK. A family interment with full Military service will follow at Memorial Park. Virtual services will be available on YouTube.com Broken Arrow Church of Christ, Harry Harper Memorial Service.

Harry Lee Harper was born on January 8th, 1936 in Tulsa, Oklahoma and the Lord&#8217;s angels took him peacefully on September 15, 2020 at home with his wife by his side. He will be greatly missed by all those who loved and cherished him. Harry... View Obituary & Service Information

The family of Harry Harper created this Life Tributes page to make it easy to share your memories.

Send flowers to the Harper family.