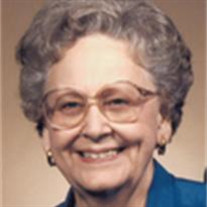 She was born on February 5, 1911 in Akins, Oklahoma, a small farming community just outside of Sallisaw.Â  She was the oldest girl and had 3 brothers and 2 sisters (one which is still with us at 95). Her mother died shortly after her youngest sister was born so she left school in the 8th grade to care for the family.Â  She learned her amazing cooking and baking skills from her grandmother during this time. Â In 1927 she began dating a young man named William (Bill) Wickett and on March 30, 1929 they were married.Â  They resided in several communities in Oklahoma where her husband was a teacher and then a school administrator.Â  They lived in Atkins, Marble City (where they had the only telephone in town) and then finally moved to Tulsa in 1948.Â  During World War II they loaded up the family and moved to California where her husband and brother-in-law worked as electricians on the Liberty ships.Â  They returned to Oklahoma in 1948 when her husband became the Superintendent of the East Central School District and she was known as the First Lady of East Central Schools.Â  She ran the school cafeteria at East Central and then later at Walter Reed Elementary until her retirement. Generations of school kids grew up on her beans and cornbread and her rolls!Â  Her pies, especially the coconut cream and chocolate, and her cinnamon rolls were legendary among family, friends and all of those at her church.Â  They even earned her a nickname when she would go to Houston to visit her granddaughter and great grandchildren, she was known as one of the â??Bun Sistersâ?Â  and was always welcomed with a sign in the yard asking for cinnamon rolls.Â Â  She was an avid sports fan and spent many hours in the gym watching her children and then her grandchildren play basketball and she and her husband were a fixture at the softball fields with their chairs and umbrella to watch her grandchildren play.Â  She played basketball during her junior high years and would always watch the OU Sooners and really any ballgame that was on TV. Â Sometimes we would have to remind her that the replay was really just the replay!Â  Her smile was contagious and you could hear her laugh in a crowded room.Â  She loved her family, friends and really complete strangers; of course they didnâ??t stay strangers for very long.Â  Â She was a member of the Garnett Road Baptist Church for over 30 years and she was a member of Eastern Star for over 60 years.Â  She was an amazing lady that we all hope someday to be. The change she saw in her life is mind boggling for most of us. Â She began her life riding a horse. She saw the Model T, a man land on the moon, air travel, microwave ovens, store bought bread, television from the beginning to her new flat screen! Â On her 99th birthday, her wish was to make it to 100 because it would just be a shame otherwise!Â  Well she did make it to 100 this February and all of us are so glad that she did.Â  She lived her life with grace and kindness for everyone she met.Â  We will all miss her so very much. She is survived by her two children, William Wickett and his wife Shirley of Huntsville, Alabama and her daughter Clara Grove of Tulsa, Oklahoma.Â  Five grandchildren, Paul Wickett and his wife Lynn of Alabaster, Alabama, Pamela Caruso and her husband Scott of Huntsville, Alabama, Paula Kuykendall and her husband Patrick of Broken Arrow, Oklahoma, Patty Walker and her husband Lawrence of Kingwood, Texas and Peggy Condik and her husband John of Huntsville, Alabama.Â  Seven great grandchildren, Tracy Branakn and her husband Justin, Paul Wickett, Scott Caruso and his wife Mandy, Capt. Jacob Caruso (currently serving in Afghanistan), Will Caruso, Amanda Walker and Nathan Walker and two great, great grandchildren, Joseph and Hunter and her sister Gladys Walters of Sallisaw, Oklahoma and many nieces and nephews.Â  She is preceded in death by her parents, her husband of 65 years, William Wickett, her brothers, Melvin, Earl and Perry, her sister Cherokee (Chuckie) and her favorite son-in-law, Bill Grove.Â  We love you and will celebrate your life today.Â  Until we see you againâ?¦â?¦

She was born on February 5, 1911 in Akins, Oklahoma, a small farming community just outside of Sallisaw.Â  She was the oldest girl and had 3 brothers and 2 sisters (one which is still with us at 95). Her mother died shortly after her youngest... View Obituary & Service Information

The family of Hazel Beatrice Wickett created this Life Tributes page to make it easy to share your memories.