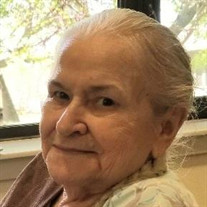 Helen Sue Cowherd passed away December 14, 2021 at the Kaiser Health Center of Zarrow Pointe in Tulsa, Oklahoma. She was 93. She was born November 8, 1928 in the Greasy Creek area of Wetumka, Oklahoma. She was the youngest of 13 children. Helen was preceded in death by her husband of 73 years, Murrel Cowherd; her firstborn son, Carrol (Sam) Cowherd; her parents, Willie Young and Dora Ruddell Young; six brothers, Edgar, Raymond, Ovie, Earnest, Don, and Clyde; and six sisters, Mae, Mayme, Ruby, Agnes, Mary-Lee, and Louise. She is survived by two sons, Kim Cowherd (Sue) and Kent Cowherd; daughter-in-law, Rebecca Cowherd; step-grandson, Jason Sims (Ashley); grandson, Kyle Cowherd (Lauren); granddaughter, Jordan Cowherd; two step-great-granddaughters, Mackenzie Sims and Caroline Sims; great-granddaughter, Zorie Cowherd; great-grandson, Archer Cowherd; and step-great-great-granddaughter, Kylie Sims. She was born the youngest child to a modest and loving sharecropping family. She graduated from Wetumka High School in 1946. She had aspirations to attend college and study home economics, but that was not to be. Early in 1947, she met and fell in love with Murrel Cowherd. They married August 14, 1947 and made their first home together in Weleetka, Oklahoma. Their first child, Carrol, was born in July of the following year. While Murrel grew his career with Public Service Company of Oklahoma, Helen dedicated her life to raising her children and managing the family household. In 1960, Murrel was transferred to the newly constructed Northeastern Station in Oologah, Oklahoma. Helen was a major force in ensuring that this transition was a successful one for her family. She took an active interest in the education and extracurricular activities of her sons, which included playing sports and playing in the school band. In 1968, Helen opted to enter the workforce. She first worked in Claremore, Oklahoma as a stock clerk at the first Oklahoma Walmart store. For a short time, she also worked for Murphy Switch in Tulsa, Oklahoma as an assembly line worker. She transitioned to a position at Claremore Health Center as an admissions clerk, which she held until she and her family moved to Tulsa, Oklahoma in 1973. She then went on to hold clerical positions at St. Francis Hospital and the Broken Arrow dental office of Dr. John Lavoie. She retired in approximately 1988. Helen took great pride in her family. She was a loving and devoted wife, mother, grandmother, and great-grandmother. She was an outstanding cook. She hosted periodic family holiday meals and many informal gatherings as well. Some of her signature dishes were mashed potatoes, biscuits and gravy, turkey and dressing, fried quail, and the perennial after-church favorite, Sunday pot roast. Her joy was boosted when she felt assured that her family and friends were well nourished and satisfied. She adored her grandchildren and great grandchildren and invested a great deal of her time and resources in their care and upbringing. Helen’s hobbies included cooking, sewing, and playing the card games bridge and pitch. She and Murrel were among the founding members of an Oologah pitch club that met regularly for good food, fun, and laughter. They continued to participate well after they moved to Tulsa. Helen was deeply spiritual and devoutly Christian and she and Murrel raised their children in that tradition. They were longtime members of Asbury United Methodist Church in Tulsa, Oklahoma. For many years prior to that, they were members of the First Christian Church in Claremore, Oklahoma. Going back further, they were members of the First Christian Church in Weleetka, Oklahoma where Helen was a member of the choir. Among many other things, Helen will be remembered for her devotion to family, warm heart, sweet disposition, and irresistible smile. A double graveside memorial service for Helen and Murrel will be held at 11:00 AM on Tuesday, December 21, 2021 at the Gethsemane Garden of Floral Haven Cemetery in Broken Arrow, Oklahoma. Donations in Helen’s honor may be made to Asbury United Methodist Church. 6767 South Mingo Road, Tulsa, OK 74133.

Helen Sue Cowherd passed away December 14, 2021 at the Kaiser Health Center of Zarrow Pointe in Tulsa, Oklahoma. She was 93. She was born November 8, 1928 in the Greasy Creek area of Wetumka, Oklahoma. She was the youngest of 13 children. Helen... View Obituary & Service Information

The family of Helen Sue Cowherd created this Life Tributes page to make it easy to share your memories.

Send flowers to the Cowherd family.