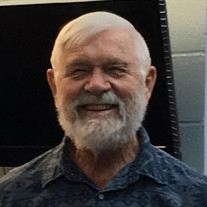 Henry Taylor Chandler, Jr, 88, of Broken Arrow, passed away February 24, 2020 in Tulsa, OK. He was born December 17, 1931 in San Antonio, TX to Henry Taylor Chandler and Helen Hailes Chandler. Taylor is a graduate of Trinity University in San Antonio. He was a long time member of Tulsa Walking Club and really enjoyed all the walks and walking trips they took together. He loved spending time and taking trips with his children and grandchildren. He was a Scout Master for many years in Slidell, LA. He was a Deacon and Elder of the First Christian Church, Slidell, La. Taylor was a PFC in the Army during the Korean Conflict, and served 2 years active duty; he then was in the Army reserves for another 6 years. He started his own business, Taylor Label Company, over 40 years ago and grew it to be a very successful business. He was preceded in death by his parents, Sister Margaret Ann Cooper and granddaughter, Abby Nicole Randolph. He is survived by his wife of 67 years, Ronda of the home; his sister Kaye Engates of Seattle, WA; his daughter Ranae Randolph and husband Bill, of Montgomery, TX; his son, Skip Chandler and wife Nancy, of New Orleans, LA; his son, Lee Chandler, of Broken Arrow; and his son, Brad Chandler and wife Celine, of Canyon Lake, TX. He has five grandchildren, Chris Randolph, Nia Chandler, Erin Chandler, Astin Chandler and Devin Chandler. Visitation will be held on Thursday, February 27, 2020 from 4 - 7 pm at Floral Haven Memorial Park. A funeral service to celebrate Taylor's life will be held on Friday, February 28, 2020, at 11:00, Floral Haven Rose Chapel, 6500 E 129th St So, Broken Arrow, OK. 74012, with internment to follow at Ozark Memorial Park in Joplin, MO. Donations may be made in his honor to the Alzheimer's Foundation online at Alzfdn.org.

The family of Henry Chandler created this Life Tributes page to make it easy to share your memories.

Send flowers to the Chandler, family.