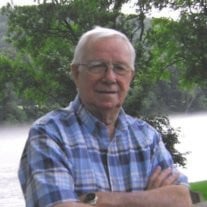 Lay, Herbert Doyle, was born November 6, 1928 in Plummerville, Arkansas to Andrew Jackson and Ella Jewel Lay. Herb passed away on April 6, 2013 at Clarehouse in Tulsa, Oklahoma. Herb joined the Army on October 5, 1948 and was released from active duty on January 31, 1950, but was recalled on October 24, 1950 to November 29, 1951 for the Korean War. He then moved to Tulsa, Oklahoma in 1951 to be close to his brother Earl. Working through the layoffs at Douglas and American Airlines he joined the United States Postal Service in 1962 until his retirement. He received his 50 year pin of membership in the National Association of Letter Carriers in July of 2012. Herb was preceded in death by his parents, his brothers Vern, Paul, Olen, Tommy, Norman, Earl and sisters Lillian and Drucilla. In 1953 he met Marilyn Sue Brady and they have been married for 59 years. They have three children; Kevin Craig Lay, Carla Sue Garrett and Cynthia Ann Lay. He has two grandchildren; Amanda Jewell Garrett and Casey Richard Garrett both of Tulsa, Oklahoma. He is also survived by sisters; Mary Alice May of Fayetteville, Arkansas and Gwendolyn Mattson of Alpharetta, Georgia, his sisterâ??in-law, JessieLay of Irving, Texas, along with his cousin John Q. Sutterfield of Newcastle, Oklahoma with many nieces and nephews and a host of friends. In lieu of flowers the family asks that donations be made to Clarehouse at 7617 S. Mingo Road, Tulsa, Oklahoma. A celebration of his life will be held on April 10, 2013 in the Floral Haven Funeral Home Chapel at 10:00 AM and the family will receive friends at Floral Haven on Tuesday April 9, 2013 from 5-7 PM. Floral Haven (918)252-2518

Lay, Herbert Doyle, was born November 6, 1928 in Plummerville, Arkansas to Andrew Jackson and Ella Jewel Lay. Herb passed away on April 6, 2013 at Clarehouse in Tulsa, Oklahoma. Herb joined the Army on October 5, 1948 and was released from... View Obituary & Service Information

The family of Herbert Doyle Lay created this Life Tributes page to make it easy to share your memories.