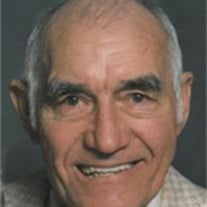 Herbert Dean Wise Sr., born December 29, 1919, in Parsons, Kansas passed on to be with his Heavenly Father on October 1, 2012. He is now sharing the peace and comfort of heaven with his beloved wife, Varda, who preceded him in death. Also preceding him in death were his mother, father and sister. Herb grew up during the depression years. He found the love of his life, Varda Louise Rembert in Tulsa, OK; they were married on March 19, 1941. After serving in World War II, Herb received an honorable discharge. After working in the printing business for others, Herb, along with Varda, established and successfully ran AdArt Printing Company for 25 years. Upon retirement from the business world, they built a home (literally) in Red Bud Cottage Colony on the shores of Lake Fort Gibson. There they were instrumental in the establishment of the Flat Rock Fire Department. A few years ago they returned to the Tulsa/Broken Arrow area. Herb and Varda celebrated their 69th wedding anniversary in 2010, a few months prior to Vardaâ??s death. Herb is survived by four children, Linda Peyton (husband Allen) of Olathe, Kansas; Donna Staples (husband Judd) of Cedar Park, Texas; Herb Wise (wife Jo) of Broken Arrow; Julie Lovell of Kansas City, Missouri; eight grandchildren and 14 grandchildren. Herb is one of the late, great gentlemen of a bygone era; he will be greatly missed by all. His grandsons, Terry Peyton, Michael Owen, Steven Owen, Dean Wise and Matt Wise along with his granddaughters Cassie Lovell, Harmony Kate Lovell and LaDawn Peyton will serve as honorary pallbearers. Herb was the quiet type, always working behind the scene to assure his loving wife; children and grandchildren always had what they needed. For all he did, he never felt he had done enough. Herb and Varda raised their children with the values we cherish here in America. . . hard work, honesty and thoughtfulness. A graveside service will be held at Memorial Park Cemetery at 1:00 PM on Friday, October 12, 2012, followed by a â??celebration of lifeâ? service starting at 2:30 PM at Forest Park Christian Church, 9102 S. Mingo St., Tulsa, OK. Online condolences may be made at www.floralhaven.com Visitation from 2-7 PM on Thursday, October 11, 2012.

Herbert Dean Wise Sr., born December 29, 1919, in Parsons, Kansas passed on to be with his Heavenly Father on October 1, 2012. He is now sharing the peace and comfort of heaven with his beloved wife, Varda, who preceded him in death. Also preceding... View Obituary & Service Information

The family of Herbert Dean Wise Sr. created this Life Tributes page to make it easy to share your memories.