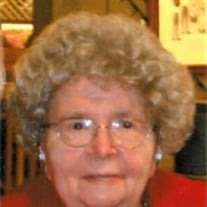 Hildred Genevieve Phillips 96, died Thrsday, August 18, at the Broken ArrowÂ Nursing Home.Â  She hadÂ  lived in Tulsa and Broken Arrow for ten years.Â  She was born October 11, 1914 in Stringtown, Indiana, the daughter of Lester and Alice Eakin.Â  She graduated fromÂ  high school in High Springs, Florida, in 1932.Â  She attendedÂ  Trevecca Nazarene College in Nashville where she met her husband , Robert BryantÂ  Phillips (deceased in 1984).Â  They were married in Tampa, Florida , in 1933 and celebratedÂ  their fifieth anniversary in 1983.Â  Her husband was a minister in the Church of the Nazarene for 40 years duringÂ  which time Mrs. Phillips assisted him by being the piantist in the services.Â  They retired in Little Rock, Arkansas in 1975.Â  Mrs. Phillips is survived by five children: Robert Stanley Phillips of Lawton Oklahoma , Julia Alice Kelly of Wausau , Wisconsin, James Lewis Phillips of Tulsa, Joseph Warner Phillips of Broken Arrow, and Deborah Anne Payne of Broken Arrow.Â  She is survived by eight grandchildren:Â  R. BruceÂ  Phillips of San Antonio,Â  Brian Phillips of Edmond, Oklahoma, John Wesley Kelly of Wausau, Wisconsin , JamesÂ Phillips of New YorkÂ City, Vivian Jenkins ofÂ Tulsa, Cynthia Masterson of Seattle, B. SeanÂ  PayneÂ of Broken Arrow andÂ Ryan Payne of Brampton, England.Â Â  She is also survivedÂ  by nine great-grandchildren and six-great-great grandchildren.Â Â  Mrs Phillips’ was a seamstress by profession until the age of 85.Â  She enjoyed her passions of sewing, crafting and doll collecting from the time she was a child.Â  Mrs. Phillips’Â  memorial service will be Saturday, August 27, at 3:00 Floral Haven Funeral Home Chapel in Broken Arrow.Â  She will be buried beside her husband in Shelbyville, Tennessee.

The family of Hildred Genevieve Phillips created this Life Tributes page to make it easy to share your memories.