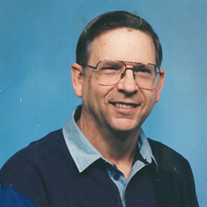 Homer Allen, 82, of Broken Arrow, Oklahoma passed away at his home under the care of his family and Hospice of Green Country, on February 6, 2022. Homer was born to Elmer Emmett Allen (Slick) & Florence Riley Allen, April 17, 1939 in Pittsburg, Kansas. He was a graduate of Pittsburg High School in 1957 and he attended Pittsburg State University where graduated with a degree in Industrial Technology in 1972. Dad is preceded in death by his Mother Florence, Father Elmer, Sister Mary Walker, Brother-in-law Gene Walker, Sister-in-Law Irene Allen, Nephew Brad Allen, Niece Lisa Walker, and Nephew John Swindell. He married Sharon Kay Samson on May 15th, 1964 in Pittsburg, Kansas at the First Nazarene Church. They first met a couple of years earlier when she was working at the bowling alley grill in Pittsburg. Dad having a shy side, took his time till she spoke up and asked him if he was the one who is to ask for “pistachio ice cream”! The funny fact is that mom's oldest sister and dad's sister-in-law cooked up this plan to get them to meet. However, what’s funny is that the bowling alley did not serve ice cream! He grinned big and said yes! They were engaged a year later. Dad, a machinist by trade spent and most of his career working with companies in the manufacturing industry. He retired from Kenco Engineering with over 25 years of service providing machining and manufacturing support. When dad passed, I said that “heaven gained a gentle giant today”. He truly was dedicated to his family with the ever-presence of calmness, gentleness, and support for whatever the situation was for the moment. He was the family rock and is so ever missed. Dad was known for his ability to fix just about anything. This included projects like house remodeling, auto repair, and auto restoration. He started building his first car in high school, a model T. Dad restored a 53 Ford F100 Anniversary model most recently. Another item was an antique roll-top desk which was repaired and rebuilt like new. There just was not much he could not do. I was often envious that the fixit traid skilled me in a lot of was, my projects I tackled always seemed to have spare parts left over. Dad liked the Beach Boys, Chet Akins, and always got a charge over some of the Ray Stevens songs that seemed to leave a streak of laughter or that one squirrel that went buzzerk! He is survived by his wife of 57 or years Sharon Samson Allen of Pittsburg Kansas two kids, Kevin Allen son, Lori Allen daughter, grandkids Riley Allen, Bryson Allen, and Hailee Allen. Today is called Dad's celebration of life! I can tell you beyond a shadow of a doubt he verbally confirmed to me his security as a believer in the hospital. This brings much comfort knowing this and sets the stage of a much greater celebration which occurred on February 6 between the hours of 5:30 and 6:15 left this life and into heaven. I am reminded of a song that I have sung in the past “I Bowed On My Knees and Cried HOLY”, specifically the 2nd verse: As I entered the gates of that city, My loved ones all knew me well. They took me down the streets of Heaven; Such scenes were too many to tell; This verse rings out to me because when dad was 15 years old he spent a lot of time with his mom who was ill with cancer. Consequently, he lost his mother at the age of 15. Therefore, in the early morning hours on February 6, he hugged his mom for the first time in 67 years! Oh what a hug that must have been with his mom, dad, sister Mary, and rest of his family. Homer Allen April 17, 1939 - Feb 6, 2022

Homer Allen, 82, of Broken Arrow, Oklahoma passed away at his home under the care of his family and Hospice of Green Country, on February 6, 2022. Homer was born to Elmer Emmett Allen (Slick) & Florence Riley Allen, April 17, 1939 in Pittsburg,... View Obituary & Service Information

The family of Homer Allen created this Life Tributes page to make it easy to share your memories.

Homer Allen, 82, of Broken Arrow, Oklahoma passed away at his...