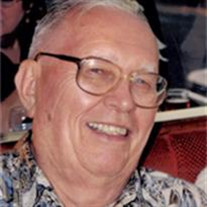 Having lived an active, productive and blessed life on this earth, Homer William Hilst passed on to his eternal home on April 23, 2011. Homer was born September 7, 1929, at Natrona, KS to Rev. William and Lola Hilst.Â He was the fifth of eight children and is survived by his sisters Helen Hilst and Jeanette Gottberg and brother Dr. Wilbur Hilst.Â He was predeceased by his parents, his sister Elnora, and brothers Harold, Glenn and Ronald. Â  Homerâ??s education through the eighth grade was in a two-room parochial school at St. Paulâ??s Lutheran Church in Natrona.Â He attended high school at St. Johnâ??s Academy in Winfield, KS as a full-time boarding student.Â His first two years of college as a pre-ministerial student were at St. Johnâ??s College also in Winfield where he met Doris Bogie, his wife of almost 60 years.Â  Â  Homer and Doris were married August 5, 1951 in Dorisâ?? home town of Okmulgee, OK. They immediately moved to Chicago, IL where Homer completed course work in Property Insurance (1952) and a Bachelor of Science degree (1953) in Business and Economics at Illinois Institute of Technology.Â Homerâ??s education at IIT was paid for through an innovative work scholarship program whereby he attended school and completed two years of work in an insurance company home office. Â  In 1954, Homer and Doris settled in Tulsa, OK where Homer joined Chandler, Frates and Reitz Insurance Agency.Â In 1964, George Utley and Homer became partners in the Epic Insurance Agency which later merged with Walter Bryce Insurance Agency.Â Homer retired from the Walter Bryce Agency in 1998.Â Ironically, George Utley and Homer died about three months apart in 2011. Â  Homer and wife Doris raised four children, Les, Cynthia (John), Roger (Stephanie) and Jeff (Lynn) each of them surviving.Â They have seven grandchildren: Aubrie, Hans, Angelica, Spencer, Clarissa, Hayden and Holly.Â As both Homer and Doris were from large families, they also have 35 nieces and nephews, all but three surviving. Â  Homer had a life-long interest in education.Â He earned the prestigious designation of Chartered Property and Casualty Underwriter in 1961.Â Within a few years, he began teaching the CPCU courses locally and continued doing that for more than 30 years.Â Homer was recognized nationally because his students sitting for the CPCU exams each year often recorded the highest passing rate.Â Homer also chaired the Insurance program at Tulsa Community College for several years. Â  Besides insurance, Homerâ??s business interests included participation in numerous commercial, apartment and agricultural property ventures in Tulsa and several states. Â  Homer was a member of Grace Lutheran Church in Tulsa since 1955.Â He served as an elder, Sunday school teacher, church council president and treasurer numerous times.Â He sang in the church choir for almost 50 years.Â He also sang in the city-wide Lutheran Messiah for some 38 years.Â Homer was a Grace home group member for many years.Â  When the Missouri Synod Lutheran Church established life and health insurance and pension plans for full-time church workers in the mid-1960s, Homer visited every congregation in Oklahoma, some several times, until each church had enrolled in the denominational plans.Â Â Â  Â  This ended up being of some benefit to Homer as many Lutheran churches had him write their insurance.Â Later, at the Walter Bryce Agency, Walter and Homer also under-wrote insurance for all of the Catholic parishes in the state of Oklahoma. Â  Homer was elected to the board of the Lutheran Church Missouri Synodâ??Oklahoma District and served for approximately 12 years.Â During that time he also served as treasurer and then manager of Camp Lutherhoma near Tahlequah, OK for eight years. Â  Homer and Doris greatly enjoyed traveling to virtually every state and many foreign countries.Â Often the travel was in conjunction with national CPCU, Delta Dental and Lutheran Laymanâ??s League conventions.Â Homer and Doris also thoroughly enjoyed more than 20 Elderhostel programs around the USA.Â They also regularly subscribed to the Armchair Traveler series in Tulsa for many years. Â  While in Chicago, Homer and Doris ushered for the Chicago Symphony and sang in the Lutheran Choir of Chicago.Â This foreshadowed a life-long love of music and other cultural activities.Â They were long-time subscribers to Tulsa Philharmonic and Tulsa Symphony.Â Other interests included Tulsa Opera, the Chamber Music Society, Celebrity Attractions, Gilcrease and Philbrook Museums, Chatauqua, and OK Mozart. Â  Other interests included playing bridge, working in the yard and being season ticket holders for Oral Roberts University menâ??s and womenâ??s basketball. Â  Two other involvements are noteworthy.Â In 1986, Homer and Doris bought a timeshare near Branson, MO.Â For the next 21 years, they made numerous trips to Branson.Â Homer was elected to the board of Fairfieldâ??Branson and served in that capacity for more than ten years.Â As a member of the board, Homer (and Doris) was in Branson for up to a week for each of the quarterly board meetings.Â Few people have enjoyed more activities and shows in the Branson area than they. Â  In 1988, Homer was asked to join the board of the Oklahoma Delta Dental Plan.Â At the time, the Oklahoma plan was in financial difficulty, finally having to be managed by the Arkansas plan.Â Over the next 23 years, Homer served in numerous board capacities including Chairman.Â Today, the Oklahoma plan is one of the financially strongest in the nation.Â Homerâ??s resignation from the Oklahoma Delta Dental board took place on April 16, 2011.Â He was the longest serving board member and his service has been appreciatively and respectfully noted by his peers. Â  Homer Hilst is fondly remembered and will be deeply missed. Homerâ??s memorial service will be at Grace Lutheran Church, 2331 E. 5th Pl. in Tulsa, at 2:00 PM on Thursday, April 28, 2011.Â The family encourages memorial gifts to either The Lutheran Hour or Lutheran World Relief.

Having lived an active, productive and blessed life on this earth, Homer William Hilst passed on to his eternal home on April 23, 2011. Homer was born September 7, 1929, at Natrona, KS to Rev. William and Lola Hilst.Â He was the fifth of eight... View Obituary & Service Information

The family of Homer William Hilst created this Life Tributes page to make it easy to share your memories.

Having lived an active, productive and blessed life on this earth,...