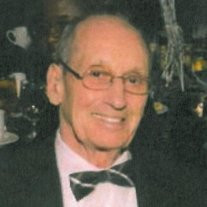 Howard McIntosh was born on July 10, 1926 to Alexander and Alice McIntosh. Alexander, having recently completed his service in WWI, had immigrated to the United States from Scotland. After settling & earning enough money to begin a family he sent for Alice and they were married. They made quick time of beginning their family and had 4 children. Howard was the third of 4.Growing up the child of immigrant parents during the depression shaped Howard’s work ethic, his sense of duty and his sense of honor. As the depression came to a close and WWII began, Howard applied himself in high school. He eventually earned an apprenticeship as a tool and dye maker & worked a year as an apprentice before becoming old enough to enlist in the Army.During his apprenticeship, he met a girl he affectionately called Joanie. The war caused them to separate but like most young lovers in 1945, they wrote letters to each other while Howard was away. Each letter began the same, “My Dearest Darling”.While in the army, Howard was an exceptional athlete. He was placed with a battalion of men who were scheduled to deploy to Europe, but his commander requested that he stay behind to play on the Army football team. When he refused out of loyalty, he was told by the commander, “You can play football or you can stay here and work KP duty until the war is over. Either way, you’re not going with them.” So, Howard resigned to playing for the Army football team. His battalion was eventually deployed and none survived.Shortly after he returned from service, he reunited with Joan & they were married on September 20, 1947 in Flint, Michigan.Because of his apprenticeship, Howard was coming home to a job as a skilled tradesman. Once hired at Chrysler as a tool and dye maker, he set out to be a good provider, husband and father. Ultimately, he worked at Chrysler for 30 years.Howard and Joan raised 2 sons, Ron and Gary. Like their father, they were both very athletic, winsome boys. Their family lived in suburban Ohio for 15 years before Howard was first invited to a Christian Businessman’s meeting. It was there that he came to know the Lord. In the span of 18 months, Howard, Joan, Ron and Gary had each decided to follow Christ. Shortly after that, both Ron and Gary were enrolled in Oral Roberts University pursuing full time ministry. It was there they met their future wives, Judy & Debbie.Having settled in Tulsa and started families of their own, the boys persuaded Howard and Joan to move to Tulsa to be closer to their grandchildren. Howard and Joan lived in the same home in Tulsa for 12 years. That home became the central gathering place of the McIntosh family, the place where memories came to be made. Christmases, birthdays, and Sunday afternoons were warm celebrations filled with home cooked meals and meaningful conversations.In what seemed like the blink of an eye, time passed and Howard and Joan had been married 50 years. Exactly 1 year later, Joan passed away on their 51st wedding anniversary.Heartbroken and alone for the first time in his life, Howard grieved the loss of the woman he had loved across 6 decades. Then he began to pray.He asked the Lord for a Godly wife, for a partner, a love. Then standing in the health food store he saw her. Having no fear, he asked for her number and took her on their first date. They were married 4 months later and a new chapter in his life began.Shirley was a constant source of love and support for Howard and he was the same for her. Together they ministered at church, visited the sick in the hospital and led small groups of married couples. They poured out what they had learned about the Love of God to everyone they came in contact with.He began each day with a simple phrase, “Good morning God, Good Morning Jesus, Good Morning Holy Spirit” opening a conversation with the Lord. These conversations led to so many insights that he wrote down by hand on a tiny flip notebook that was always in his shirt pocket. Whenever someone took the time to share an issue with him, he took out his tiny notebook and spoke to them, what the Lord had spoken to him.Almost 10 years ago, Howard McIntosh sat down with his family & taught gently what he had learned across his life. He said, “All of life is about love and loving well.” He revealed the years he had not loved well and how the love of God transformed him. He was now a man with an open heart, an open life, loving others as God had loved him.As a family we know that this is the most valuable inheritance he leaves to us. This is what we gain in our loss. Just like him, we desire to be people with open hearts who love others the way that God has loved us. So we invite you today to share in our inheritance. Our family heritage is offered freely to those touched by our grandpa’s life. May we each receive today the unconditional love of 2 fathers and the will to love and love well.“Watch the homegoing celebration service live online at: http://transformchurch.us/ ”

Howard McIntosh was born on July 10, 1926 to Alexander and Alice McIntosh. Alexander, having recently completed his service in WWI, had immigrated to the United States from Scotland. After settling & earning enough money to begin a family he... View Obituary & Service Information

The family of Howard McIntosh created this Life Tributes page to make it easy to share your memories.