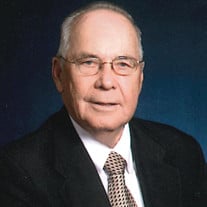 Howard Ray Mefford Howard was born on 11/24/1933 to Ray Mefford and Delphia Mae Scism Mefford in Oktaha, Oklahoma. He passed away peacefully in his home in Berryhill on 3/29/2021. He was 87 years old. Howard’s family moved to Berryhill in 1944 where he resided until his death. He graduated from Berryhill High School in 1951. He was a US Army Veteran. He served in the Army from 1953 to 1955. He was stationed in Germany, working in Warehouse Supply, and was honorably discharged. Howard married Delois Ruth Shelton on April 21, 1958. They were married 60 years before Dee passed away on June 7, 2018. In 1963 he graduated 2nd in his class from the TU School of Law and was a member of the Oklahoma Bar Association 58 years Howard joined the law firm of Frasier, Wilde, Richards, and Mefford from 1963 to 1969. In the early 1970’s he was partnered in the law firm of Robert Wilde, Bob Pigman, Robert Miles, and Howard Mefford. He was appointed a Tulsa County Special District Judgeship on Aug 21, 1992 Howard served on the Berryhill Fire Board from 2009 to 2020 and was Chairman of the Board for several years. Those who met him in Heaven in addition to his wife, Dee were his granddaughter, Holly Danielle Henry, and his son, Brian Keith Mefford and we know it was truly a joyous reunion. He was also preceded in death by his parents, Ray and Delphia Mefford, his brother, Carl, his sister, Karen, and his nephew, Mike Mefford. He is survived by his daughter, Carla Dee Mefford, his granddaughter, Haylee Ray Woolsey, and her husband, Garret, his precious great-granddaughter, Rozalin Queen Wadkins, his sister, Mae Rogers, his brother, Calvin Mefford, and many other members of the Mefford and Shelton families that loved him. Howard became a Christian and joined the West Tulsa Free Will Baptist Church on November 7, 1976. He became a board member and bus driver that picked up children to bring them to church on Sunday mornings. Later, he drove the church van and brought elderly members to church that could no longer drive. More recently, he helped by preparing snacks and serving them to the children during their Sunday Morning Church Service. Howard will be missed greatly by his family and friends, but our hearts are happy that he is out of pain and able to see his Savior Jesus Christ and his loving family once again.

Howard Ray Mefford Howard was born on 11/24/1933 to Ray Mefford and Delphia Mae Scism Mefford in Oktaha, Oklahoma. He passed away peacefully in his home in Berryhill on 3/29/2021. He was 87 years old. Howard&#8217;s family moved to Berryhill... View Obituary & Service Information

The family of Howard Ray Mefford created this Life Tributes page to make it easy to share your memories.

Send flowers to the Mefford family.