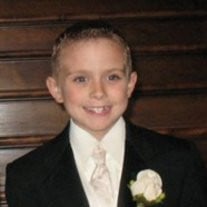 Ian James Reiff, 13, of Broken Arrow, died Sunday, July 21, 2013. He was born in Tulsa, Oklahoma on February 16, 2000, the son of Oliver and Rebekah (King) Reiff. Ian was an active, energetic kid, who enjoyed skateboarding, playing soccer, riding his bike, swimming and climbing trees. He loved super heroes!!! He was known to dress up as Superman, Spiderman, etcâ?¦, but his TRUE love was for the Lord. Ian would get tracks from Incredible Pizza to hand out to others at the mall, in hopes they would find the love of Jesus. His faith was so strong for such a young man. He enjoyed reading out of the King James Bible and was active in Awanaâ??s. Ian loved animals and was especially fond of his two dogs. Ian is survived by his parents, sister, Emma Reiff, brother, Aiden Reiff, both of the home, Grandparents, James and Carolyn King, of Pevely, Missouri, and David and Paula Batchelor, of Broken Arrow, Uncles, Jeremy King, and his wife Tara, Matthias Reiff, and Michael Reiff, aunt, Bernadette Cooper, cousins, Savannah, Courtney, Trey, Jackson, Jacob and Noah. He was preceded in death by his grandparents, Erwin and Elke Reiff. In lieu of flowers, memorial donations may be made toward Ian’s cemetery marker at Floral Haven Funeral Home.

The family of Ian James Reiff created this Life Tributes page to make it easy to share your memories.