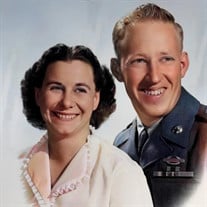 Inell Gaddy Allen, 92, of Broken Arrow, OK, took Jesus’ hand and traded her earthly body for a heavenly one Tuesday, January 4, 2022. Inell was born on April 18, 1929, in Broken Arrow, OK, to Bryan and Annie (Kindley) Gaddy. She married Richard Edward Allen on July 28, 1948, in Broken Arrow. They were happily married 58 years. Inell worked 30 years as an Export-Shipping Clerk for Seismograph Service Corporation. Inell’s greatest love in life, besides her Savior, was Richard and her family. Nothing gave her more joy than their company while serving and loving on their two children and spouses, four grandchildren plus one spouse and one great grandchild. Inell was an avid gardener and loved to take her grandchildren out to pick fresh vegetables and flowers. She had the prettiest yard in the neighborhood. Inell loved her church family and participated in many activities. Inell witnessed a lot of history in her life. She was born a child of the Great Depression, lived through The Dust Bowl, World War II, waited for Richard while he served in the Korean War, survived tornadoes, floods, hurricanes and pandemics. She will be greatly missed by her family and friends. Inell was preceded in death by her parents Bryan and Annie (Kindley) Gaddy; husband Richard Allen; brothers, Carl and sister-in-law Dorothy Gaddy and Clyde and sister-in-law Virginia Gaddy. She was the last of her generation of the Gaddy family, early pioneer settlers in Broken Arrow in 1899. She is survived by her children, Stephen and Linda Allen, Mark and Ann Allen; grandchildren, Daniel and Michelle Allen, Elizabeth Allen, Sam Allen, Charlie Allen and great grandchild George Allen. A Funeral service will be held at 1 p.m. Friday, January 21, 2022 at the Trinity Lutheran Church in Broken Arrow. Interment will follow at Floral Haven Memorial Gardens. Floral Haven, 252-2518. In lieu of flowers, donations to Lutheran World Relief are requested (https://lwr.org/).

The family of Inell Gaddy Allen created this Life Tributes page to make it easy to share your memories.