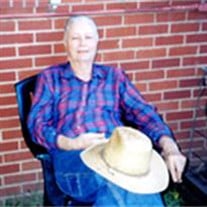 Irvin Edwin Ziriax passed away on Tuesday, August 10, 2010. He was 93 years old. Irvin was born November 19, 1916 in Voca, Texas to Gus Ziriax and Mary Estella (Hopkins) Ziriax. As a young man Irvin helped on the family farm and also worked for other farmers and ranchers in the area. He joined the Army Air Corp. in November, 1940 and served for the duration of World War II. He was stationed for more than 2 years in India where he worked as an aircraft mechanic. Irvin married Marian Louise Romig on August 12, 1942 in Alamogordo, New Mexico. They were married for 46 years until her death in July, 1988. They had two sons, James Douglas and Charles Alan. Irvin and his family moved from Washington State to Tulsa, Oklahoma in 1950 in order to earn his A&P license from the Spartan School of Aeronautics. Irvin was employed with American Airlines from 1951 until his retirement in 1981. His interests in traveling and gardening kept him busy during his retirement. Irvinâ??s grandchildren were also an important part of his life. In April, 1996, Irvin married Annabelle Asbell. She survives him at the home. In addition to his wife, Annabelle, Irvin is also survived by his son James of Tulsa; son Charles and wife Pamela of Claremore; grandsons and wives Danny and Molly, Steve and Lisa, Chris and Julie (all of Tulsa), Paul and Lisa of Edmond, Oklahoma and granddaughter Angela Ziriax of Tulsa, Tony Simms of Ochelata, OK; six great grandchildren; his brother Clinton Ziriax of Brady, TX; sister in law Dorothy Romig of Bainbridge Island, WA as well as numerous nieces and nephews in Texas and Washington; step-son Andy Chapman of Tulsa, step-daughter and husband Betty Lou and Paul Kettering of Biloxi, Mississippi and two other step-children. Graveside services will be held at Floral Haven Memorial Gardens, Veterans Field of Honor on Friday, August 13, 2010 at 10am. Visitation will be held on Thursday from 1pm â?? 9pm. The family will receive friends between 6pm and 8pm.

The family of Irvin Edwin Ziriax created this Life Tributes page to make it easy to share your memories.