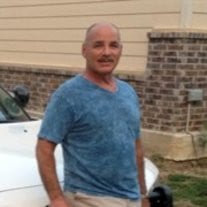 Jack “Buddy” Cook, Jr., 60, of Claremore, died Thursday, November 7, 2013. He was born on January 18, 1953 in Claremore, Oklahoma, the son of Jack and Juanita Cook. On January 20, 1982 he married the love of his life, Karen. Buddy had served his community as a police officer for the city of Claremore for 25 years prior to his retirement in 2012. He is survived by his loving wife, Karen Cook, son, Bobby Cook, of Owasso, daughter, Lyndsey Hamlin, of Claremore, grandchildren, Alaina Cook, Kaleb Venable, Kolbey Venable, Jayden Venable, and Jazmin Hamlin, and numerous other family members and friends. He was preceded in death by his parents, and sister, Janey. Memorial donations may be made in Buddy’s name to his church home, Church On The Move, 1003 N. 129th E. Ave., Tulsa, OK 74116.

The family of Jack “Buddy” Cook created this Life Tributes page to make it easy to share your memories.