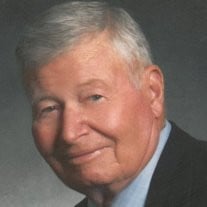 Jack Lavern Merrifield was born October 17, 1930 in Sayre, Oklahoma to Luther and Evelyn Merrifield. Jack passed away on Monday, April 22, 2013 at the age of 82 after an extended illness. After graduating from Sayre High School, Jack served in the Air Force for 3 years and was honorably discharged in 1953. He then moved to Kansas City, Missouri where we met the love of his life, Colette. Jack had 3 successful careers spanning 47 years. He opened Merrifield Insurance Agency in Broken Arrow in 1962 and owned it for 25 years. He then owned and operated Broken Arrow Sports Center for 12 years and, lastly, he received his series 7 license and started and ran the in-house securities department at Arkansas Valley State Bank for 10 years. Jack retired in 2000.Jack developed a love for the outdoors at an early age growing up in western Oklahoma and it stayed with him his whole life. He enjoyed golfing and fishing but had a passion for bird hunting and for his dogs. He loved training and then watching his dogs work in the field. While he loved hunting and fishing, what he loved most was attending his 9 grandchildren’s school plays, grandparent days, dance recitals, soccer, basketball, football and baseball games. He was a wonderful PaPa!He was a season ticket holder of Tiger Football and a supporter of Broken Arrow Athletics for over 50 years. Jack was an active member of the Broken Arrow Civitan Club for 45 years. He served as President in 1973 while at the same time his son, Steve, served as President of Jr. Civitans. He was a member of St. Benedict Catholic Church.He was preceded in death by his parents and is survived by: his wife, Colette; four sons, Steve and wife Cindy Merrifield; John Merrifield and partner Sergio Garcia; Mike and wife Theresa Merrifield; Gary and wife Karen Merrifield; nine grandchildren, Beth and husband Tyler Latta, Becky and husband Landry Leach, Matt Merrifield; Alex and Jenna Merrifield; Sarah, Greg, Jack and Abby Merrifield; and one great grandson; Luke Latta; three brothers, Loren and wife Rhonda Merrifield; Dean and wife Sharon Merrifield; Darrell and Anita Merrifield and one sister, Joy and husband Luke Mikles, and many nieces and nephews as well as several great nieces and nephews.He was a loving husband, father, grandfather, brother, uncle and friend. He will be deeply missed.In lieu of flowers, please make donations to the American Cancer Society or Catholic Charities of the Diocese of Tulsa.

Jack Lavern Merrifield was born October 17, 1930 in Sayre, Oklahoma to Luther and Evelyn Merrifield. Jack passed away on Monday, April 22, 2013 at the age of 82 after an extended illness. After graduating from Sayre High School, Jack served... View Obituary & Service Information

The family of Jack Lavern Merrifield created this Life Tributes page to make it easy to share your memories.