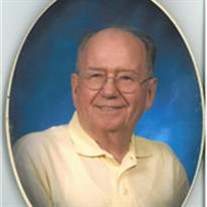 Jack Junior Wade was born on January 9, 1925 in Oakhurst, OklahomaÂ and went to be with the Lord on July 18, 2012.Â He was the son of James and Verna Wade of Oakhurst.Â Jack is survived by his wife of 67 years Juanita, three daughters Jackie Beebe and husband James of Edmond, Ok; Rhonda Mathis and husband James of Broken Arrow, OK and Gayla Hubeli and husband Chris of Broken Arrow, OK.Â Â  Jack and Juanita also raised his younger sister Beverly Dunn who lives with her husband Gene in Broken Arrow.Â Â Also surviving are three grandchildren, Tonya Fondren and husband Thomas of Edmond, , Amy Barker and husband Craig of Broken Arrow, and Joshua Mathis and wife Kaly of Oktaha. Â He leaves four great grandchildren, Slater and Tatum Fondren of Edmond and Emmy and Max Barker of Broken Arrow.Â  He was a devoted husband and family man and if something didnâ??t include his family, he just did not do it.Â He built their first family home in Tulsa near Admiral and Sheridan when most of the land surrounding the home he built was cow pasture.Â In his second home in the same area, he built a large den onto that home.Â He was very creative and an excellent carpenter. There was nothing that he could not repair and many times he would figure out how to build something he needed at home when buying it already made was not in his budget. He loved to go to the lake and at one time bought a wooden Â boat in need of major repairs and spent many months refinishing it until he made it into a beautiful black and white ski rig including homemade skis.Â The boat was enjoyed for many years by both family and friends. Jack retired from American Airlines as a mechanic in the rotor shop after 36 years of dedicated service.Â He was very proud of the picture poster that was presented to him at his retirement with the good wishes and signatures of his fellow workers including the signature of Bob Crandall, the Chairman of American Airlines.Â Â  He also was given the barstool, restored and personalized, that he used for years at his workbench. Jack was a Godly man who lived his life based on the teachings of Jesus.Â He was a loving husband who nicknamed his wife Sug from the start and anyone who knew Jack, knew who his beloved Sug was.Â He loved his girls and they in turn adored him.Â He spoiled his grandchildren and was always available if they needed anything.Â They in turn thought he was just the best.Â Â  He loved his dogs and animals and his girls enjoyed all types of pets in their youth. . He taught his girls and grandchildren by example and his integrity and morals were just one of the many qualities which made him a precious soul.Â His word was his bond and he truly believed in â??do unto others as you would have them do unto you.â?Â Â He was a kind man who did not seek the spotlight, who did not have a selfish bone in his body and who did not search for pleasures for just himself.Â  He was a hard worker his entire life and his body suffered lots of pain during his later years because Â of all the physical work he did.Â Even though he had a good strong heart, it was just not enough to overcome Â the dementia and the pain which enveloped Â his body.Â By Godâ??s grace, on Wednesday morning as the sun rose, God wrapped him in his arms and took him peacefully home as he slept.

Jack Junior Wade was born on January 9, 1925 in Oakhurst, OklahomaÂ and went to be with the Lord on July 18, 2012.Â He was the son of James and Verna Wade of Oakhurst.Â Jack is survived by his wife of 67 years Juanita, three daughters Jackie... View Obituary & Service Information

The family of Jack Junior Wade created this Life Tributes page to make it easy to share your memories.