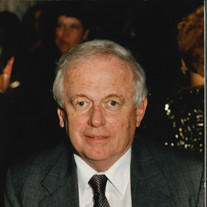 Jack Alden Williams, 95, of Tulsa, passed away peacefully at home on March 10. He was born June 29, 1926, to Charles and Margaret Williams in Wichita, Kansas. He spent his childhood in the town of Bentley, Kansas and graduated there with a class of 16 seniors in 1943. After graduating, he went on to Kansas University to begin his college education in Chemistry. It was short lived as he was inducted into the Army at the age of 18. He served during WWII from 1944 to 1946 in Philippines and Japan. Upon his return home, he continued his education at Kansas University. It was in Lawrence where he met his future wife, Barbara, the love of his life. They were married 64 years until her death in 2014. They continued to live in Lawrence while he finished college where he earned a doctorate in Chemistry. After college he went to work for Standard Oil (which later became Pan American, then Amoco) as a geochemist, where he worked until his retirement in 1989. The loves in his life were family, travel and singing. He travelled frequently with Barbara, his dad Charles (Aral) and his brother Larry. Not only in all 50 states, but also a multitude of countries all around the world. He was proud to be called a “legend” in the Tulsa Opera, having performed in 101 productions of the operas. He also sang in the choir at First Presbyterian Church for 49 years and at many weddings and funerals. Not ready to give up singing, he continued with a group of friends at Montereau in Tulsa until Covid hit the world. He is survived by children Jack Jr, Pat Sirkis and husband Wes, Kim Flanagan and husband Keith, and Lori Williams all of Tulsa. Grandchildren Melanie West, Traci Allen, Matthew Sirkis, Jensen Blough, Morgan Jones, Maggie Flanagan. Great grandchildren, Maura West, Derrick West, Noah Allen, Jude Craig, Mary Sirkis, Ellee Sirkis, Lucy Sirkis, Anna Sirkis, Catherine Sirkis, Dominic Sirkis, Gemma Martin, Dreke Martin, Jacob Martin, Josephine Jones, and one on the way, brother Larry Williams and wife Carolyn and numerous nieces and nephews. He was preceded in death by wife Barbara and grandson Jacob Lee Craig. Visitation will be held 4:00 PM - 6:00 PM, Tuesday, March 15, 2022, at the Floral Haven Funeral Home Visitation Suites in Broken Arrow, Oklahoma. A Celebration of Life service will be held 3:00 PM, Wednesday, March 16, 2022, at the Floral Haven Funeral Home Chapel in Broken Arrow, Oklahoma. Memorial donations may be made in his honor to Tulsa Opera. 1610 S Boulder Ave, Tulsa 74119, or to First Presbyterian Church, 709 S Boulder, Tulsa, 74119. For family and friends that are unable to attend the service in person, they are invited to join the service at the following link: https://webcast.funeralvue.com/events/viewer/70914/hash:32E5C4AF8832CB9B

Jack Alden Williams, 95, of Tulsa, passed away peacefully at home on March 10. He was born June 29, 1926, to Charles and Margaret Williams in Wichita, Kansas. He spent his childhood in the town of Bentley, Kansas and graduated there with a... View Obituary & Service Information

The family of Jack Alden Williams created this Life Tributes page to make it easy to share your memories.

Jack Alden Williams, 95, of Tulsa, passed away peacefully at...

Send flowers to the Williams family.