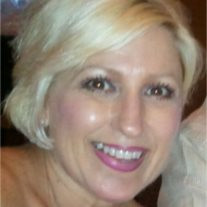 Jacquelyn Marie Waid, age 52, of Broken Arrow, Oklahoma, passed away July 14th 2013. Born May 9, 1961 to Jack and Wilma Glover in Tulsa, Oklahoma, Jacquelyn was the 7th child of 11 children.“Jackie” or “Jackleen” (nickname given by her father) as friends and family knew her, was a bright light and full of life. She took pride in her work in the insurance industry for twenty plus years. She was also a successful business owner of a floral shop in Tulsa that was demonstrated in her love for flower gardening.Jackie had a keen eye for decorating and a flare for fashion.Motorcycle riding was her favorite pastime with her love Ken Gray. She had spent nearly the last ten years of her life with him.Her greatest gifts from God are her daughter, Brooke, and grandchildren, Avery and Chance. She adored them just as much as they adored her. Her love, words of wisdom, and sweet smile will be forever missed. She was her daughter’s biggest cheerleader and her grandchildren’s biggest fan. There is nothing that she wouldn’t do for them. Jackie will be greatly missed by so many for her smile, love and laughter. She was the best mother, grandmother, daughter, sister, aunt, and friend we could have asked for.Jackie is survived by mother, Wilma Glover, daughter, Brooke Waid-Ketchum and husband Chris Ketchum, grandchildren, Avery and Chance Gruenwald, siblings, Denny Glover, Gary Glover, Jackie Ray Glover, Roger Glover, Shirley Brownlee, Lisa Crewe, Chris Glover, and Lynda Selvidge. She is preceded in death by her father, Jack Glover, sister, Cathy Glover and brother, Ronnie Glover and joined at passing with her fiancÃ©, Ken Gray.There will be a memorial service held Friday, July 19th at Destiny Church at 11:00 am, 1700 S Aspen Avenue, Broken Arrow, OklahomaFlowers or an in-kind donation to the church can be sent to Destiny Church.

The family of Jacquelyn Marie Waid created this Life Tributes page to make it easy to share your memories.