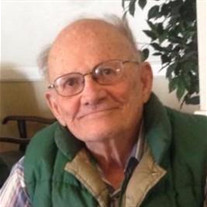 James Edward Bentz, 90, of Tulsa, Oklahoma, died on January 28, 2020 in Claremore, Oklahoma at the Veteran’s Center where he had been a resident. He was born in Minneapolis, Minnesota to Kenneth George and Hazel Ziggafoos Bentz. Jim was a lifelong Methodist. After graduating from Highland Park High School in Dallas, he attended Southern Methodist University, where he met his first wife, Betty Bentz, who was the mother of his 3 children. He joined the Army at the age of 22 and served as a Chaplain’s Assistant in Japan during the Korean War, during which time he also started a Boy Scout Troop. Jim grew up as a Boy Scout, attaining his Eagle Scout award in 1946 at the age of 17. Boy Scouting was THE single most influential aspect of his life. His father worked as a professional Boy Scout Executive, and was influential in establishing and working at several Boy Scout camps around the country, including the Sommers Canoe Base in Ely, Minnesota, (all the Bentz boys have commemorative paddles on display there to this day), and Philmont Scout Ranch in New Mexico. Jim continued the family tradition, working as a “Swamper” at Sommers Canoe Base and as a Trail Guide at Philmont Scout Ranch, then working as a Boy Scout Executive in charge of International Relations in Beeville and Richardson, Texas, New Brunswick, New Jersey, and finally Tulsa, Oklahoma, before going back to school to attain his CPA certification after moving to Tulsa. He worked as the Lead Accountant in the Five Year Planning Department at Williams Pipeline in Tulsa, and finally retired from the Williams Company in 1992. After retirement, Jim enjoyed his Tanzer sailboat, bought an Avion travel trailer, and continued to travel around the country and the world, constantly seeking further adventures. Over the years, in addition to hiking and traveling, Jim enjoyed square dancing, singing in the church choir, clowning, scuba diving, and walking his dogs several miles daily. Jim was preceded in death by his parents, his former wives Betty and Helen, and his older brother Donald Bentz. Jim is survived by his children Linda Bentz Elston and husband David, son Richard Charles Bentz, daughter Janet Bentz Parker and husband Alan, his younger brother Robert Bentz, and numerous nieces and nephews. Memorial services will be held at 10:00 on Friday February 7, 2020 at Floral Haven, Broken Arrow, Oklahoma, with inurnment to follow. In lieu of flowers, donations may be made in his memory to the Boy Scouts of America Indian Nations Council. In honor of Jim’s love of hiking and dogs, a Memorial Dog Walk Party will be held at 11:00 the following day, Saturday, February 8, 2020, at the ARF House at Lafortune Park, 5201 S. Yale, Tulsa, Oklahoma. Bring your own dog or walk a rescue dog. Memorial Services will be held on Friday, February 7 at 10 am in the Floral Haven Chapel. In lieu of flowers, the family requests that donations be made to the Boy Scouts of America in James' memory.

James Edward Bentz, 90, of Tulsa, Oklahoma, died on January 28, 2020 in Claremore, Oklahoma at the Veteran&#8217;s Center where he had been a resident. He was born in Minneapolis, Minnesota to Kenneth George and Hazel Ziggafoos Bentz. Jim was... View Obituary & Service Information

The family of James Edward Bentz created this Life Tributes page to make it easy to share your memories.

Send flowers to the Bentz family.