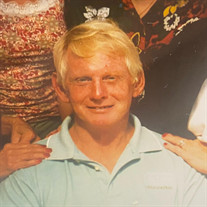 James William "Bill" Backburn, 72 of Tulsa, Oklahoma passed from this life on Sunday, January 30, 2022, in a Tulsa hospital with family by his side. He was born on October the 15th of 1949 to his parents, James V. Blackburn and Laurine Jean... View Obituary & Service Information

The family of James "Bill" Blackburn created this Life Tributes page to make it easy to share your memories.

Send flowers to the Blackburn family.