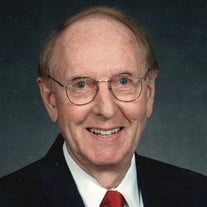 Webcasting is available for those that cannot attend the service in person. Please follow the following link for webcasting: https://webcast.funeralvue.com/events/viewer/70695/hash:A4CC9F7AB6CB9975 James M. Casey, a retired Air Force Colonel and former Rockwell supervisor died peacefully on March 4, 2022. He was 94 years old. A memorial service will be held on March 19, 2022, at 12:30 pm at the chapel at Floral Haven funeral home followed by a military honors graveside service. James was born November 19, 1927, to Olive (Bell) and Dewey Casey on the family farm in Dade County, Missouri. He graduated from Dadeville High School in May 1945 where he was president of his class. He attended the University of Missouri until Uncle Sam called. He served two years in the US Navy before returning to school. He graduated from the University of Missouri in 1951 with a BS in Business and a commission in the United States Air Force. On November 10, 1951, he married Shirley Rusk of Oklahoma City. After graduating from Air Force pilot training at Vance Air Force Base, Enid, he was sent to Korea where he flew combat support missions. For the next 22 years he served in countries across the globe. During the Vietnam War, he led a squadron of C-130 airlift aircraft. He accumulated more than 5,000 flying hours in nine different aircraft and was a command pilot. He was a Division Head on the Joint Chiefs of Staff at the Pentagon. He received the Legion of Merit and the Distinguished Flying Cross Air Medal, among numerous other citations. His service was an inspiration, and he was privileged to swear into the military a nephew, a granddaughter and three grandsons. His youngest grandson will be commissioned in 2023. During his Air Force years Jim also earned a BS in Industrial Engineering from OU and an MA in Public Administration. He retired from the Air Force in 1975 and he and Shirley settled in Tulsa. He worked at Rockwell International (now Boeing) as an industrial engineer and supervisor, retiring in 1988. Jim was a member of John Calvin Presbyterian Church for 42 years where he served as a deacon, trustee, and elder. He was a member of the Rockwell Management Club, Tulsa Republican Club, and Military Officers Association of America. He served as a precinct officer for the Tulsa County Election Board from 1995-2008. He and Shirley were recognized by the IRS for over 20 years of community service as a volunteer tax preparer. In addition, he worked with the Community Action Project of Tulsa County and the Better Business Bureau. Jim enjoyed being outside working on his lawn, time at his cabin at Fort Gibson Lake, grilling, traveling, and home repairs as well as the genealogy of his family. Family time with the grandchildren watching ballgames, listening to concerts, and playing board games kept him feeling young. Jim was preceded in death by his wife of 56 years Shirley, and his brother Clarence of Kansas City, Mo. He is survived by one sister Irene Climer of Springfield, MO; one brother Bill Casey of Eugene, OR; one son, Larry of Ft. Lauderdale, FL; daughters Jama Raubach and her husband Gerry, Lacinda Keilbarth and her husband Dennis, both of Tulsa and Marcina Lee and her husband Robert of Hilton Head Island, SC. Jim was very proud of his 12 grandchildren: David (Hillary) Raubach, Kathryn Raubach, Michael (Kristin) Raubach, Carole (Joshua) Neace, Robert (Jess) Lee, John Casey, Mary Casey, James (Katy) Keilbarth, Casey (Kayla) Keilbarth, Mark (Abbie) Keilbarth, Marie Keilbarth, Eric Keilbarth, and 7 great-grandchildren. He was a beloved uncle to several nieces and nephews. Webcasting is available for those that cannot attend the service in person. Please follow the following link for webcasting: https://webcast.funeralvue.com/events/viewer/70695/hash:A4CC9F7AB6CB9975

The family of James M. Casey created this Life Tributes page to make it easy to share your memories.

Webcasting is available for those that cannot attend the service...

Send flowers to the Casey family.