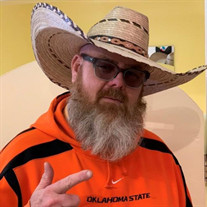 JR Dillard, 56, of Broken Arrow, passed away on August 8, 2021. He was born February 19, 1965, in Calgary, Alberta Canada to James Dillard and Carol Davis. JR was preceded in death by his grandparents Austin and Eunice Dillard and Carl and Clara Margaret Jones. JR is survived by his wife, Sheila, together for 20 years, married for 14 years; his mother Carol Davis of Broken Arrow, Oklahoma and his father Jim Dillard of Cleveland, Oklahoma; his sisters; Jan Cook and her husband David Cook of Cleveland, Oklahoma and Jill Dillard of Waco, Texas; his nephews; Clint Dillard, Benjamin Dillard, Jefferson Cook, JD Sparks, Josh Sparks, Jeremy Hathcoat, and Jordan Hathcoat. A Celebration of Life for JR will be held at Floral Haven, 6500 S 129th E Ave, Broken Arrow on Saturday, August 14, 2021, at 10:00 am in the Main Chapel. Immediately following the service, a celebration luncheon will be held in the Floral Haven Family Center from 11:00 am to 1:00 pm. In lieu of flowers, the family asks that you contribute to Pete’s Pet Posse to honor the two things he loved the most, his dogs, Gundy & Coco, and OSU. https://hr.okstate.edu/pet-therapy/index.html JR Dillard, who became one of the top tight ends in Oklahoma State football history in his time with the Cowboys from 1983-87. Dillard spent five seasons at OSU, redshirting as a freshman in 1983 before going on to catch 53 passes for 513 yards and four touchdowns. In the 1987 Sun Bowl, his final game with the Cowboys, he made three receptions for 18 yards and caught a touchdown. OSU won the game over West Virginia, 35-33. Dillard was an all-state pass catcher at Cleveland (Oklahoma) High School, where Dave Wannstedt, Jimmy Johnson, and Larry Lacewell were among those who came to watch him play, both on the football field and the basketball court. When Dillard chose OSU, he followed in the footsteps of his father Jim, who rushed for 1,840 yards and 13 touchdowns for the Cowboys from 1959-61. After his college career, Dillard had a brief stint in the Canadian Football League. After football, Dillard went into social work with the Oklahoma Department of Human Services as a County Director and celebrated his 28-year work anniversary in July. JR enjoyed most of all spending time with his wife, Sheila, and their two dogs, Gundy and Coco. He loved turkey, dove hunting, and fishing on the White River and Buffalo River in Arkansas with his cousins. He and Sheila enjoyed many miles riding their Harley’s across the country. JR met and kept many friends from all walks of his life. For those that cannot attend the service in person webcasting is available at the following link:https://webcast.funeralvue.com/events/viewer/58370/hash:84BF6AC4E01BA762

JR Dillard, 56, of Broken Arrow, passed away on August 8, 2021. He was born February 19, 1965, in Calgary, Alberta Canada to James Dillard and Carol Davis. JR was preceded in death by his grandparents Austin and Eunice Dillard and Carl and Clara... View Obituary & Service Information

The family of James "J.R." Dillard created this Life Tributes page to make it easy to share your memories.

Send flowers to the Dillard family.