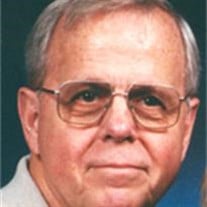 J. Donald Walker, 81, passed away November 2nd in Tulsa. Don was born to James P. and Belle Purdom Walker in Tulsa on October 8, 1931. He graduated from Rogers High School in 1949 and Oklahoma State University in 1954. At OSU, he was a charter member of Phi Kappa Tau fraternity and was a 2nd Lieutenant in the Oklahoma Army Reserves, Corps of Engineers. After graduating with a B.A. in Architecture, he took a position with Murray Jones Murray as a draftsman. Don then partnered with Joe Wilkinson as Wilkinson-Walker and later with Fred Chadsey as Walker-Chadsey, where they designed and developed many important commercial buildings in the Tulsa area. In the 1970s, he began building residential homes while continuing commercial development work. Other partnerships and businesses included Residential, Inc.; General Properties with partner Vern Seuss; and Walker Development and Spectrum Development with Joe O’Brien. Don made his mark on the city of Tulsa with over 50 years of architecture, commercial development, and residential developments such as Wynnewood, College Park, and Audubon Park. He put his personal stamp on each subdivision, using innovation in home and in neighborhood design. His later years in business focused on property acquisition, development and sales in partnerships with Jim Dunn and Rick Ellison in Metroland Development, with Steve Robbins, Forum Properties, and many others. He was a member of the Home Builders Association of Tulsa and was past-president of the Tulsa chapter of the American Institute of Architects. Â  Don enjoyed OSU football, Tulsa Oilers games, trips to Las Vegas and Europe, sailing on Grand Lake, playing tennis, and coaching and attending many of his children’s and grandchildren’s athletic events. He developed and maintained lifelong relationships with people from all walks of his life, from elementary school friends to business associates. Don was known in Tulsa as a talented architectural designer and businessman with great integrity, boundless energy, and a dry wit. Â  Don was preceded in death by his parents and his beloved sister Nancy Roberts. He leaves behind his wife Cheryl of 38 years and a son, Parker, of the home, daughter Valerie O’Brien of Tulsa, daughter and son-in-law Sharon and Mark Ramsey of Argyle, Texas, daughter Kim Walker of Tulsa, son and daughter-in-law Robert and Cecily Walker of Lewisville, Texas, and 7 grandchildren. The family greatly appreciates the love and attention given to Don by Miller Hospice, the Tulsa Jewish Health Center, and his dear friend Joe O’Brien. Graveside service will be 1:00 p.m. Wednesday, November 7, at Floral Haven Memorial Gardens, and a memorial service and celebration of Donâ??s life will be held at 3:00 p.m. at Hope Unitarian Church, 8432 S. Sheridan Road, Tulsa. Memorial gifts can be sent to the Tulsa Foundation for Architecture, 2210 S. Main St., Tulsa, OK, 74114. Floral Haven Funeral Home, Broken Arrow.

J. Donald Walker, 81, passed away November 2nd in Tulsa. Don was born to James P. and Belle Purdom Walker in Tulsa on October 8, 1931. He graduated from Rogers High School in 1949 and Oklahoma State University in 1954. At OSU, he was a charter... View Obituary & Service Information

The family of James “J.” Donald “Don” Walker created this Life Tributes page to make it easy to share your memories.