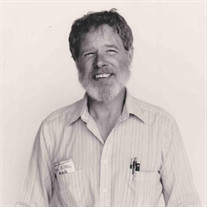 On Friday, December 10, 2021, James Dale Eubanks, loving father, brother, grandad, and friend passed away at the age of 79. James, whom everyone called Jim, was born on February 16, 1942, in Fullerton, CA to James Wayne and Cleolene (Rousey) Eubanks. During his childhood, his family moved to Tulsa, OK, where he graduated high school before joining the US Army in 1961. While in the Army, Jim specialized in communications and traveled throughout much of Germany and France. After leaving the Army in 1966, Jim lived and worked in Germany for many years. He returned to the States and settled in Southern California where he worked as a technical writer. In 1986, he welcomed his daughter Julia. Jim had a passion for nature, working in the outdoors and making improvements to the land around him. In the early 1990's he built a homestead in Northern California where he lived off the grid, relying on solar power, firewood, and natural spring water. When he wasn't working for an alternative energy company and helping others with their alternative energy projects; he was working on the land with a rake, shovel, and a cup of coffee. Jim also enjoyed writing short stories, painting, working with computers, and visiting with his grandchildren. Jim was known for his protective nature, adventurous spirit, quick wit, and the love he showed his family and friends. He was preceded in death by his father James Wayne, his mother Cleolene, his stepmother Devern and his sister Barbara. He is survived by his daughter Julia, his two grandchildren Haylee and Preston, his brother Steven, his sister Joy and several cousins, nieces and nephews. A Celebration of Life service will be held for family and friends at a later date.

On Friday, December 10, 2021, James Dale Eubanks, loving father, brother, grandad, and friend passed away at the age of 79. James, whom everyone called Jim, was born on February 16, 1942, in Fullerton, CA to James Wayne and Cleolene (Rousey)... View Obituary & Service Information

The family of James Dale Eubanks created this Life Tributes page to make it easy to share your memories.

Send flowers to the Eubanks family.