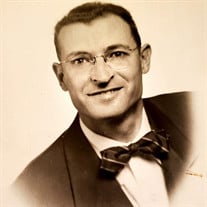 James Robert Gates, 99 of Claremore, Oklahoma passed from this life on Sunday, April 12, 2020 at the Claremore Veteran’s Center in Claremore, Oklahoma. He was born February 11, 1921 in Davis City, Iowa to his parents, Samuel Robert Gates and Gretchen Violet Teale Gates. He had one sister, Jean Gates Dains. James grew up in Enid,OK and graduated from Enid High School. James served in the United States Army during World War II as an MP and in the Army Corp of Engineers building the runway on Okinawa. He graduated from OSU with a degree in general engineering and worked for Amoco as a senior staff engineer for over 32 years. He loved to fly and was a Lt. Col. in the Civil Air Patrol in Ft. Worth Texas. His other love was serving as a HAM Radio operator and volunteering at the Ft. Worth Police Department. James married Winifred Elzora Hatch on January 10, 1943. They were married almost 60 years and had three children, Jana Sue, Robert Clare and Mary Elizabeth. James is survived by his two children, Robert Gates and his wife Karyne of Broken Arrow, Oklahoma and Mary Frye and her husband John of Alvarado, Texas; his grandchildren, Renay, Mary "Maggie", Bryan, Deanna, Beckie, Melannie and Thomas; his great-grandchildren, Ashlynn, Caleb, Kailea, Ian, Maddie, Tripp, Kaitlyn, Maggie, and Juliet; and other extended family members. There are no scheduled services at this time.

The family of James Robert Gates created this Life Tributes page to make it easy to share your memories.

James Robert Gates, 99 of Claremore, Oklahoma passed from this...

Send flowers to the Gates family.