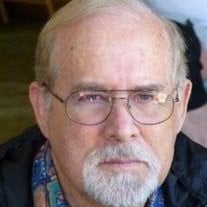 James A. Green, Jr., of Broken Arrow, died on Sunday, January 5, 2014.Jim was born in Columbus, Georgia on April 13, 1943, the son of Master Sgt. James, Sr. and Opal Green. Jim grew up in a U.S. Army family stationed at various post-World War II Army bases, including Stuttgart, Germany and Camp Zama, Japan. While his father was stationed at Fort Sill, Jim graduated from Lawton High School, Lawton, Oklahoma and soon joined the U.S. Air Force where he found his future wife, Ann, also an enlistee in the Air Force. Jim and Ann were stationed at Tachikawa, Japan during the Vietnam War, where Jim served proudly as an Air Force medic. After serving, they returned to Lawton where Jim earned his bachelor’s degree in Business Administration from Cameron College. Jim was a guitar music enthusiast and enjoyed cars, travel, and family.He is survived by his wife, Ann Green, two sons, Scott Green, and his wife, Jen, of Broken Arrow, and Mike Green, and his wife, Shannon, of Tulsa, grandchildren, Katlyn, Gabe, Alex, and Avery, brothers, Charles Green, and his wife, Mary, of Austin, Texas, Carmon Green, and his wife, Barbara, of Bryan, Texas, and Tim Green, and his wife, Amy, of Lawton, Oklahoma, and numerous other family members and friends. He was preceded in death by his parents, and brother, Wayne Green.Memorial donations may be made in Jim’s name to the American Heart Association or the Kidney Foundation.

The family of James A. Green Jr. created this Life Tributes page to make it easy to share your memories.