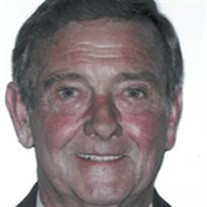 Celebration of the Life of Jim King James Henry King (Jim), precious son and brother, beloved husband, strong and supportive father, loyal friend, caring neighbor, gardener, teacher, prankster, animal lover, race car aficionado and square dancer extraordinaireâ??just to name a few of his titlesâ??died Wednesday, October 10th around 1:30 PM. The cause of death was heart failure, according to the doctors at St. Johnâ??s Hospital, but to those who knew him and loved him best, his heart never failed.Â  In fact he was all heart. In some ways Jim was a quiet man, a homebody puttering around in his apple orchard, planting and tending gardens, fishing the pond with his grandchildren.Â  His Golden Retriever Ashley, aka â??PooPâ? was usually close at his heels.Â  He was completely content spending his hours with his beautiful wife of 52 years, Laura.Â Â  However, many of us remember another side of Jimâ??the man who got the party started, the quick wit who loved to laugh and tell jokes and have a good time with friends. They will remember the harmless flirt, a man who loved and respected women.Â  He always lamented that the females who were attracted to him were either twice his age or twice his junior.Â  Needless to say he was loved by all ages. There are others who will recall his kindness and generosity of spirit, and all the volunteer hours he worked with organizations such as the YMCA Camp Takatoka, Junior Achievement, â??The Great Raft Raceâ? fund raiser for muscular dystrophy, and his work with the The United Way Agency and the Metropolitan Chamber of Commerce â??Tulsellers.â?Â  He believed it was important to give back to your community and he taught that to his children. His family and friends will remember a man of high integrity, a man who kept going when the going got rough, a man of gentle strength.Â  He was a man of faith, but he believed in showing it by your actions rather than your speech.Â  After a short stint in the aircraft field where he earned his single engine pilotâ??s license and worked for Boeing and Beechcraft in Wichita, Kansas, he took a job with Sunray DX and moved the family to Tulsa.Â  Upon retiring from Sun Oil at age 54, he decided to go to graduate school and earned his Masterâ??s degree in Human Resources Management.Â  He worked until retirement at 65 for Berensenâ??s as a Human Resources Manager, recruiting, training and handling benefits programs.Â Â  After his second retirement he became a legal mediator for the Tulsa County Courts where he spent hours helping clients arrive atÂ peaceful, mutually satisfactory conflict resolution. Jim King is survived by his wife Laura King, his children LaRhonda King Whitmire and Bob King and their spouses Paul Whitmire and Laura McKenzie King, three grandchildren Bailee, Jared and Ty, his sister Flora and brother Robert and cousin Janice Chapman.Â  We will miss his warm, bright light.

The family of James “Jim” H. King created this Life Tributes page to make it easy to share your memories.