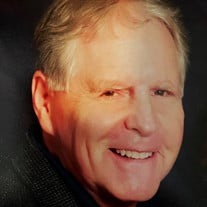 James (Jim) Jarrett Hardwick left this world Thursday, June 3, 2021, in Broken Arrow, Oklahoma. Jim was born January 2, 1941, to Mary (McGilvray) Hardwick and Kermit Jarrett Hardwick in Oklahoma City, Oklahoma. He attended high school at Casady School in OKC, where he played football, baseball and soccer before graduating in 1959. He then went on to receive his undergraduate degree from Stanford University in Palo Alto, California, where he was a member of the Sigma Alpha Epsilon fraternity. After moving back to Oklahoma, he attended the University of Oklahoma in Norman to earn a Master’s in History where he met the love of his life, Lynda Rae Harris. The two later married in July of 1964 in Kansas City, Kansas. The couple made their way back to Oklahoma City where Jim became a teacher and welcomed their first son, James Douglas, into the world in 1966. Shortly after, Jim took a job at Holland Hall and the family moved to Tulsa. In 1971, their second son, Joseph Harris, was born. Jim then accepted a position to become an instructor at Tulsa Junior College in 1971, he was with TJC during its transition to Tulsa Community College. He became tenured and was on the faculty executive board at TCC before retiring in June 2008. He was a huge advocate for education, but an even bigger advocate for his family. The patriarch enjoyed taking his family out to dinner and spending time with his sons on Saturday’s watching football or Sunday’s watching golf. During his childhood, he would spend time at the family farm in Lexington, Oklahoma. What some may not know about Jim, he loved classic country music and one of his favorites was “Lucille” by Kenny Rogers. Jim is preceded in death by his wife of 49 years, Lynda Rae, in 2013, parents Kermit and Mary Hardwick, and grandson Caleb. He is survived by his sons Doug and Joe, daughters in law Robin and Wendy, and four grandchildren, Jarrett, EJ, Madeline and Abigail along with his older sister, Mary Kay Davidson and brother-in-law Bill Davidson, of Oklahoma City. A graveside service will be held Tuesday, June 8 at 10 a.m. at Floral Haven in Broken Arrow. A celebration of life in honor of Jim will be held in the coming weeks. In lieu of flowers, the family asks that donations be made to the Tulsa Community College Memorial Scholarship Fund in Jim Hardwick’s name.

The family of James Jarrett Hardwick created this Life Tributes page to make it easy to share your memories.

Send flowers to the Hardwick family.