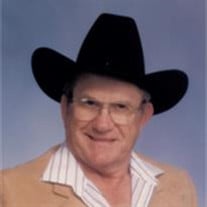 James “Jim” Curtis Hiner, Sr. passed away on May 22, 2008 in Havana, KS. He was born November 11, 1932 in Elm Grove, OK to Curtis Cleo Hiner and Reathel Fay Tate Hiner. Jim grew up in Muskogee and Keefton, OK areas and graduated from Central High School in Muskogee, OK. He joined the 45th Infantry Division of the National Guard in 1950 and served in Camp Polk, Louisiana, Japan and the Korean War until he received his Honorable Discharge on May 27, 1954. Jim married Charlotte Emma Ross on October 25, 1952 in Muskogee, OK. They raised 5 children together and lived in Broken Arrow, OK from 1961-1998. From 1998 to present he has resided in Havana, KS. He rodeoed throughout Arkansas, Kansas, Missouri, Nebraska & Oklahoma from 1947 to the early 1980’s and judged rodeos for 15 years. Jim raised cattle and baled hay his entire life. In 1993 Jim retired in 1993 from McDonnell-Douglas in Tulsa after 38 years as a machinist and serving as Chairman of the Bargaining Committee of the UAW Local 1093 for 33 years. He was preceded in death by wife, Charlotte Ross Hiner and daughter, Peggy Jo Hiner. Services will be held at 10:00 AM Tuesday, May 27, 2008 at Floral Haven Funeral Home Chapel. The family requests in lieu of flowers, donations be made to Tatman Cancer Center at CRMC, 1400 West Fourth, Coffeyville, KS 67337. Floral Haven 252-2518.Survived By: He is survived by sons and families: Jimmy and Deby Hiner and daughters, Jami and Kati of Independence, KS; Eddie and Penny Hiner and daughter, Ashley Clapper of Independence, KS; Charles aand Sharon Hiner and sons, Casey and Cody of Haskell, OK and Gary Hiner of Havana, KS.

The family of James Curtis Hiner Sr created this Life Tributes page to make it easy to share your memories.