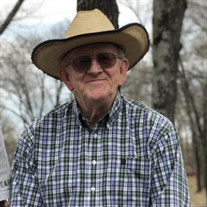 James L Hinton of Broken Arrow, OK, departed this earth for his eternal home on August 10, 2021 after a courageous battle with cancer. James was proceeded in death by his parents Clark L. Hinton and Clura Reeves Hinton of Blytheville, AR, his sister Geraldine Goff of Southaven, MS, a brother Charles Hinton of Southaven, MI, and a niece Rhonda Morgan of Blytheville, AR. James is survived by his wife of 52 years, Carol Hinton of Broken Arrow, OK, his son Brian Hinton (Brook) of Owasso, OK, his daughter Deanna Williams (Randy) of Justin, TX. Survived by six grandchildren; Austen and Tyler Hinton of Owasso, OK; Alex, Brooklyn, Hannah and Kylie Williams of Justin, TX. He is also survived by his brother Waylon Hinton (Donna) of Blytheville, AR and a brother Wayford Hinton (Sue) of Tulsa, OK. Along with many precious nieces and nephews. James proudly served his country in the Army from 1964 to 1967. James married Virginia Carol Hall June 28, 1969. James retired from Nibco in Blytheville, AR after 27 years. He then relocated to Broken Arrow, OK, where he worked for Air Exchangers for 17 years before retiring. James enjoyed 11 great years of retirement. James was an avid outdoorsman who loved hunting, fishing and hiking. In general, he loved the scenery and adventures the outdoors provided. James loved to travel touring all national museums and parks ((forests) per Carol). During his traveling adventures he was able to go to 39 states, James loved to tell the stories and share his pictures from all those adventures. James took great pride in supporting his kids and grandkids in all their extracurricular activities. During his last months on earth he could be found supporting Brian on the softball field because he was his number one softball fan. Deanna was definitely daddy’s girl. James lived his life with God first and family second, his biggest blessings he would say. James was a faithful servant of the Lord. He was a devoted husband, father, and treasured grandfather, brother, uncle and friend. He will be missed tremendously. Visitation will be held on Thursday, August 12 from 4 pm - 6 pm at Floral Haven Funeral Home. Services will be at 3 pm on Friday, August 13 at the Floral Haven Chapel. For those unable to attend, follow the link for webcasting services: View Funeral Webcast

James L Hinton of Broken Arrow, OK, departed this earth for his eternal home on August 10, 2021 after a courageous battle with cancer. James was proceeded in death by his parents Clark L. Hinton and Clura Reeves Hinton of Blytheville, AR, his... View Obituary & Service Information

The family of James L. Hinton created this Life Tributes page to make it easy to share your memories.

James L Hinton of Broken Arrow, OK, departed this earth for his...

Send flowers to the Hinton family.