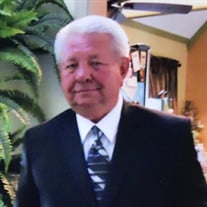 On September 11th, 1945, James Kent Boyles was born to Robert Isaac and Genevieve (Joyce) Boyles in a tiny bedroom of his grandmother Gladys King’s home in Cisne, Illinois. He graduated from Cisne Community High School in 1964, where he played basketball and ran track. After graduating, he attended and completed refrigeration school in St. Louis, MO. However, before putting his newly learned skills to use, Uncle Sam called. James chose the Navy and earned 3 commendations. He married his wife of 51 years, Rita (Shelby) Boyles on December 14, 1968, and promptly went to Tulsa, OK to attend Tulsa Welding School. It was in Tulsa, they confirmed what they had already suspected, Rita was expecting their first child, Gregory Kent Boyles. James soon had a job with MAPCO as a welder’s helper on a pipeline in Iowa City, Iowa. After nearly 2 years of working in the brutal cold, he received his first promotion as Purchasing Agent, which required he and his little family to go on the road following a new pipeline that MAPCO was building through South Texas and New Mexico. It was a challenge living in an 8x35 travel trailor for two and a half years, especially while living in 29 different towns in that short period of time. When Rita learned she was expecting baby #2, Jennifer Jo (Boyles) Judd, they decided to step down from pipelining and settle down in Sanborn, Iowa for a year. James then got another promotion that took them to Little River, Kansas, where they lived on a small farm at the edge of town. They had chickens, dogs, kittens, and a pony named April. This job promotion as project manager took him away from his family for long periods at a time, but he was on a fast plane home every opportunity he got! Another promotion came six and a half years later, and he was transferred to MAPCO’s corporate headquarters in Tulsa, OK. They had come full circle. This time he had an office in downtown, a long way from standing in cold mud welding on a pipeline! James' son, Greg, married his first wife, and gave them 2 beautiful grandchildren, James Kent Boyles II and Elizabeth Margaret Boyles. Greg then married his second wife, Elizabeth Bugarin Boyles in 2011. Then daughter, Jennie and her husband, Jason Judd gave them 2 more precious grandsons, Jonah Isaac Judd and Noah Christopher Judd. James' grandchildren were the joy of his life! James, (Jim to those who worked with him,) helped start up 4 successful companies. The fourth, Mid America Pipeline Construction Co., INC is where he stayed until his passing on April 14th, 2020. God and his family were first and above everything else in his life. He was faithful in his tithes, and in blessing everyone that he felt God had put on his heart. Giving was a great joy for him! Every major decision that he had to make in life, and especially work, was heavily discussed with his Heavenly Father. He would tell you that his success in life, and work, was a direct result of those discussions. James Kent (Jim) Boyles was a good-good man, who is now at rest with his Maker, enjoying his eternal rewards.

On September 11th, 1945, James Kent Boyles was born to Robert Isaac and Genevieve (Joyce) Boyles in a tiny bedroom of his grandmother Gladys King&#8217;s home in Cisne, Illinois. He graduated from Cisne Community High School in 1964, where he... View Obituary & Service Information

The family of James "Jim" Kent Boyles created this Life Tributes page to make it easy to share your memories.

Send flowers to the Boyles family.