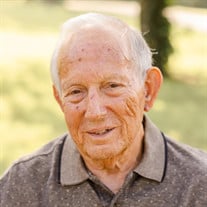 James (Jim) Henry Hancock was born to Vernon and Lillian Hancock on October 25, 1932 in Tulsa, Oklahoma. He graduated in 1951 from Daniel Webster High School. He joined the United States Air Force in 1952, and did a tour in Japan during the Korean War. When he returned to the States he was stationed at Bowling Air Force Base, in the Washington DC area and was honorably discharged in 1956 with the rank of Staff Sergeant. In 1955, he met the love of his life, Rowena Foster and they were married August 12, 1956 in Washington D.C. where she lived and was employed. They moved back to Tulsa, Oklahoma in 1956, where Jim attended the University of Tulsa. His studies took them to Stillwater in 1957, and he attended Oklahoma A&M, now known as Oklahoma State University. Eventually, they returned to Tulsa, so he could attend the Spartan School of Aeronautics, where he graduated and received an Airline Service Mechanic certification in 1960. Work moved them to Chicago, Illinois when he was employed for United Airlines, and then on to San Francisco, California. In time, they returned to Tulsa, living in the Berryhill area, where they still reside. Jim took a job with American Airlines and retired from there in 1996. Their family grew in 1965, with their daughter Becky Lynne, in 1967 with Glen Lee, in 1970 with Paula Kay and their big surprise, Carol Ann in 1973. Besides being with his family, he loved to golf and garden. He and Rowena had adventures in travel, seeing Hawaii, Texas, New York, Paris, Switzerland, London, Germany, and Austria and of course, Missouri where Rowena’s family resided. He would often be caught playing ball on the driveway, watching sports and weather on TV, along with his favorite TV shows MASH and HeeHaw. He loved to buy the latest technology gadgets, even when he didn’t know how to use them. He also enjoyed Rowena’s cooking and especially her blueberry pie. His favorite spot was his rocking chair or his chair on the patio where he loved to be warmed by the sun. When he had grandkids, he would join them in bike rides around the block, take them for rides on the lawn mower, play outside and give lots of piggy back rides. He was the best Papa. He was preceded in death by his parents, Vernon and Lillian. He is survived by his wife of 65 years, Rowena, his daughter Becky Weathers and husband Clyde of Sand Springs, his son Glen Hancock of Collinsville, daughter Paula Harrold and husband Chuck of Beggs, and daughter Carol Hicks and husband Ken of Sylva, North Carolina. His 14 grandchildren, Kara Smith (and Cory), Lindsey Smith (and Cale), Megan Weathers, Kelsey Hancock, MacKenzie Hancock, Cale Hancock, Blake Hancock, Brooklyn Hancock and Bladen Hancock. Ally Majors (and Ryan), Rachel Harrold and Katie Harrold; Jason Hicks and Annalise Hicks, and eleven great grandchildren. He is also survived by his younger brother Monte Hancock and wife Laura of Tulsa, with a host of in-laws, nieces and nephews. He loved and was loved by many. His sense of humor, kindness, and smile will be missed dearly. Private Family Services will be held. ***FOR THOSE THAT CANNOT ATTEND THE SERVICE IN PERSON, PLEASE COPY AND PASTE THE FOLLOWING WEB ADDRESS IN YOUR BROWSER OR CLICK ON THE LINK: THE LIVE STREAM WILL START AT APPROXIMATELY 9:45 AM. IF YOU DO NOT SEE THE LIVE FEED, PLEASE REFRESH THE PAGE UNTIL IT APPEARS*** http://webcast.funeralvue.com/events/viewer/59654

James (Jim) Henry Hancock was born to Vernon and Lillian Hancock on October 25, 1932 in Tulsa, Oklahoma. He graduated in 1951 from Daniel Webster High School. He joined the United States Air Force in 1952, and did a tour in Japan during the... View Obituary & Service Information

The family of James "Jim" Henry Hancock created this Life Tributes page to make it easy to share your memories.

Send flowers to the Hancock family.