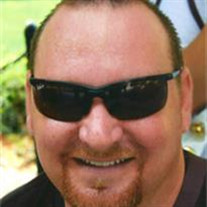 James Scott King, age 36, of Bixby, Okla., passed away on Sunday, June 26 from injuries sustained in an automobile accident. Scott was born March 6, 1975 in Tulsa to Ron and Mavis King. Â  A graduate of Jenks High School in 1993, Scott attended Oklahoma Christian University on a soccer scholarship. In 1995, he discovered his passion for electrical work, a career also shared by his grandfather. After 15 years as an industrial electrician, he earned his electrical contractors license and opened his own company, JSK Power & Electric, in 2010. Â  Scott married Elizabeth (Meier) King on February 15, 2003 at St. Clementsâ??s Church in Bixby, Okla. They met by chance under a full moon in October 2001 at a work function hosted by his father. They were together from that day forward. In 2006, Scott and Elizabeth welcomed their first child, Olivia, followed shortly by their son, Jameson, in 2007.Â  Â  Â  Proud of his Osage heritage, Scott also was given the name Che-sho-ki-he-kah, which means Chief of the Golden Eagle Clan. With his charismatic personality, Scott was a born leader who approached life on his terms. He was a devoted husband, father and son, an avid hunter and fisherman, and a die-hard Oklahoma State fan. Â  Scott is survived by his wife, Elizabeth; children, Olivia and Jameson; parents, Ron and Jan King and Mavis King; parents-in-laws, Greg and Pat Meier; grandparents, Frank and Pauline King; siblings, Sydney and Chad Noel, Courtney Moore, Gil Meier and John Meier; nephew, Chase Noel; and many aunts, uncles and cousins. He is preceded in death by grandparents, Jim and Betty Ham; and sister, Ronna King. Â  Â  The funeral service is Friday, July 1, 10 a.m., at Floral Haven Chapel, 6500 S. 129th E. Ave. in Broken Arrow. Â Respects may be paid Thursday, June 30 anytime between 12-7 p.m. at Floral Haven. Â  In lieu of flowers, contributions may be made to the Olivia and Jameson King Education Fund. To make a donation,contact Mid-First Bank at 71st and Yale, Tulsa Â  â??Lifeâ??s journey is not to arrive at the grave safely, in a well preserved body, but rather to skid in sideways, totally worn out, shouting â??Holy s#@!, what a ride!â? Â Â Â Â ~ Mavis Leyrer

The family of James Scott King created this Life Tributes page to make it easy to share your memories.