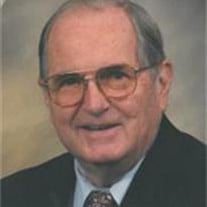 James Byron Mattax passed away peacefully on October 13th, 2012 in Tulsa, Oklahoma surrounded by his family. James, â??J.B.â?, was born on August 8, 1927, in Sperry, Oklahoma to William Hope and Gertrude Sullivan Mattax. One of six children, J.B. grew up in Lonoke, Arkansas. He was a clever and industrious child of the Great Depression. Numerous stories and tall tales of his childhood in Lonoke have entertained his children and grandchildren over the years. He left Lonoke and high school at the age of seventeen to join the United States Navy. After proudly serving as chief electrician on LST 38 in World War II, he returned to Tulsa to obtain a Bachelor of Science in Business Administration, in 1952, from the University of Tulsa. While in Tulsa he met his first love, Dorothy Fae Dalton Mattax. Dorothy and J.B. were married in 1950 in Tulsa. After he graduated, they moved to Houston, Texas, where he began a successful career as a petroleum land man. He worked for Tidewater and Getty Oil Companies in Houston, Tulsa, and finally in Oklahoma City, where J.B. and Dorothy began and raised their family of four sons. In 1962, he began a career as an independent land man, eventually running his own company, Mattax Petroleum Corporation. J.B. and Dorothy were devoted to each other and were married for fifty-four years until Dorothy passed away in 2004. J.B. then met the second love of his life, Juanita K. Mattax. They were married in 2006 and resided in Tulsa, Oklahoma, until the time of J.B.â??s death. J.B. was hardworking, inspirational, and devoted to his family and colleagues. He enjoyed family trips to his Eufaula lake house, Padre Island, Colorado, and particularly, Pendaries, New Mexico. He was very content with a piece of homemade key lime pie and a schnauzer at his feet. J.B. was preceded in death by his mother and father; his first wife Dorothy; his three brothers: Thomas Edwin Mattax, William Lee Mattax, Calvin C. Mattax, and his elder sister, Mary Evalena Cortez. He is survived by his wife, Juanita; his younger sister Betty Mattax Reebie; his four sons: James B. Mattax, Jr., of Springfield, Missouri; Thomas William Mattax and his wife, Kevyn, of Oklahoma City; Robert Dalton Mattax and his wife, Leslie, of Tulsa; and Jeffrey Bond Mattax of Eufaula. He is also survived by his grandchildren: Katherine, Benjamin, Samuel Mattax; David and Caroline Mattax; his step-grandchildren: J. Taylor, Mary, and Megan Hines; and his sisters-in-law: Wanda Dalton Barnes, and Carolyn Botkin Mattax. Visitation will be from 12:00 pm to 9:00 pm with family receiving friends from 6:00 pm to 8:00 pm, Tuesday, October 16th, at Floral Haven Funeral Home, 6500 South 129th East Avenue, Broken Arrow, Ok. A Memorial Service will be held at 12:30 in the afternoon, Wednesday, October 17th, at Floral Haven. Farewell J.B., you are loved and will be missed.

James Byron Mattax passed away peacefully on October 13th, 2012 in Tulsa, Oklahoma surrounded by his family. James, â??J.B.â?, was born on August 8, 1927, in Sperry, Oklahoma to William Hope and Gertrude Sullivan Mattax. One of six children,... View Obituary & Service Information

The family of James B. Mattax created this Life Tributes page to make it easy to share your memories.