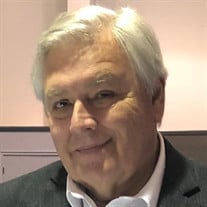 On Saturday, November 20, 2021, James Riedel, loving husband, and Navy Veteran passed away at the age of 72. James was born on August 1, 1949, in Lancaster, Pennsylvania to James and Anna Mae Gol Riedel. James enlisted in the Navy at age 19 and serviced 4 active years. He received an honorable discharge from the Navy as a second-class Radioman E-5 RM2. James enjoyed going to the lake, enjoyed dressing up as Santa at the Elks club, and loved to build and re-model rooms/homes. He built his first A-frame in Eufaula, Oklahoma that took him 5 years to complete. One of his greatest joys was researching his family tree on Ancestry. He was able to go back to the 1500s on his own search confirming the clues they sent him. He was the produce manager at Stouffer’s near Lancaster and loved to landscape, designing his garden and trees to make a beautiful site. Jim worked for the U.S. Postal Service for 38 years and retired as an Automation Operations Specialist in 2011. He was a Faithful member of Battle Creek Church South Campus always willing to help and volunteer when needed. He will be missed! He was preceded in death by his parents James and Anna Mae (Hagen) and Stepdad Andrew Gol, his sister Lisa Ann Gol and his previous spouse Barbie Lee (Martin). He is survived by his wife Debbie Riedel of 1-1/2 years, stepson Larry Plummer and Brian Smith. Mother-in-law, Mary Luther, and Sister-in-law, Diane (Larry) Cianci/Kopp. Previous wife Madelynn Riedel (Miley), son Matthew (Danielle), Daughters Kimberly, Karen (Aaron) Kovalik-Dacko, Kathy (John) Truby, sisters Deb (Paul) Murr, and Andrea (Charles) Rettew, Grandchildren Mila Kovalik-Dacko and Jack Truby. A Celebration of Life will be held on December 14, 2021, at 1 PM at Battle Creek South.

On Saturday, November 20, 2021, James Riedel, loving husband, and Navy Veteran passed away at the age of 72. James was born on August 1, 1949, in Lancaster, Pennsylvania to James and Anna Mae Gol Riedel. James enlisted in the Navy at age 19... View Obituary & Service Information

The family of James Henry Riedel Jr created this Life Tributes page to make it easy to share your memories.

Send flowers to the Riedel family.