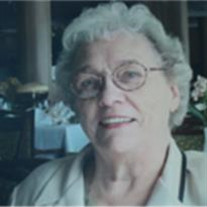 Janice M. Voskuhl was born November 8, 1929 in Covington, KY and passed from this life on June 1, 2012 in Tulsa, OK.Â  Janice worked as an accounting supervisor for years but her true calling was in the medical field and she returned to school... View Obituary & Service Information

The family of Janice Mary Voskuhl created this Life Tributes page to make it easy to share your memories.