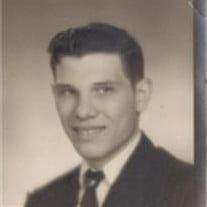 Jay Rodean Buchholz, 77, passed away January 1, 2011 surrounded by his daughters, grandchildren and other family.Â  Jay R. was born in Sabetha, Kansas on July 1, 1933 to Opal Marion and Henry â??Hankâ? Irvin Buchholz.Â  He attended school in Sabetha and graduated from Sabetha High School in 1952.Â  After graduation he joined the United States Army on May 22nd, 1953 as a Private E-1 and Left the Army on June 2nd, 1955 as a Corporal E-4.Â  He served in Japan during the Korean War and was awarded the National Defense Service Medal, United Nations Service Medal, Korean Service Medal, and the Good Conduct Medal.Â  After leaving the Army he became a Dirt Superintendent in the construction business where he built Dams and highways all over the country until he retired in the 1990â??s.Â  Jay R. moved to Clayton, Oklahoma in 1977 where he lived until May 2010 when he went to reside in the home of Rick and Terri Timmons along with their daughter Summer Gilstrap and her family, who took care of him until he left this world.Â Â  Jay R. lived a full, happy, fun life surrounded by the people and things he loved.Â  Some of his many interestsâ??s included Appaloosa horses that he raised while he lived in Clayton.Â  He loved playing the guitar, he taught himself and there wasnâ??t a guitar he couldnâ??t learn to play.Â  He loved to sing country and western music, the greats like Waylon Jennings, Johnny Cash and Willie Nelson.Â  He was a great dancer and taught his three daughters all his moves.Â  Later in life he liked doing crossword puzzles, reading Horse and Gun magazines and watching CSI and Law and Order.Â  His greatest passions in life were his family and the Lord.Â  While living in Clayton he attended the Baptist Church of Tuskahoma where he was a Sunday school teacher for many years.Â  He got great joy from knowing his children and grandchildren also believed in and had a relationship with the Lord.Â  He loved his family and there was nothing he wouldnâ??t do for them and there wasnâ??t a time he wasnâ??t there when he was needed.Â  And his family was always there for him.Â  Jay R. was preceded in death by his father Henry â??Hankâ? Buchholz.Â  His is survived by his mother, Opal Marion Buchholz. 3 sisters, Karen Wiltz, Eleanor Latham, Diane and husband John Barger, and 1 brother, Butch and wife Linda Buchholz.Â  3 daughters, Sherry Purdom, Terri and husband Rick Timmons, and Kymberly and husband Bill Ganus.Â  13 grandchildren, Nicholas Russell, Danielle Russell, Saraya Russell, Summer and husband Lane Gilstrap, Mark and wife Amy Timmons, Angela and husband Jeremie Jones,Â  Sierra and husband Justin Pugh, Blake Goodwin, Montana Goodwin, Mason Goodwin, Savannah Goodwin, Kaitlyn Ganus, and Austin Ganus.Â  8 great grandchildren, Cayden Russell, Kiley Russell, Ryleigh Russell, Kashlynn Roth, Landon Ricky Jay Gilstrap, Shawn Timmons, Marisa Timmons, Gage Timmons, and two on the way.Â  Jay R. was greatly and deeply loved by his family and all who met him, he will be missed more than words can say.Â  His family knows without a doubt that he is in Heaven with the Lord singing, taking care of horses and breathing the fresh air that he couldnâ??t get in this world.Â  In lieu of flowers the family is requesting donations that will be made to Memorials of the families choosing.Â Â  They can be sent to Terri Timmons at 19805 East 38th Place, Broken Arrow, OKÂ  74014.

Jay Rodean Buchholz, 77, passed away January 1, 2011 surrounded by his daughters, grandchildren and other family.Â  Jay R. was born in Sabetha, Kansas on July 1, 1933 to Opal Marion and Henry â??Hankâ? Irvin Buchholz.Â  He attended school in... View Obituary & Service Information

The family of Jay R. Buchholz created this Life Tributes page to make it easy to share your memories.