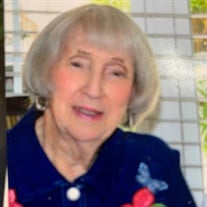 Jeanette Pearl Creely, 90, of Tulsa passed away on April 1, 2021. She was born December 26, 1930 in St. Louis, Missouri to Ed and Marie Busse who preceded her in death. Jeanette grew up an only child in Richmond Heights, Missouri. She graduated from Maplewood High School in 1948. She began working at General Electric after high school dreaming of one day traveling around the world. She met her future husband, Don, in high school but they did not start dating until he returned from serving in the Navy during the Korean War. They married on June 9, 1956 at Concordia Lutheran Church in Kirkwood, Missouri. This June they would have celebrated their 65th anniversary. They lived in Crestwood, Missouri where she was a stay at home mom to their two daughters, Lynn and Karen. She was involved in church clubs and the kids’ school activities including serving as President of the Mother’s Club of their elementary school. She was always growing her passion for writing. She wrote articles for the local newspapers and later branched out to have articles published in well-known magazines. She loved people and talking to anyone and always finding a way to share their stories in a written article. The family moved to Joplin in 1969 and later to Tulsa in 1981 where she continued her career at Southwestern Bell Telephone Company but her dream of having a job in travel continued. Her dream job became a reality after she was laid off. She started as a motorcoach tour guide with Jefferson Tours and later became employed at AAA Travel as a worldwide travel escort. When Don retired, they enjoyed taking cruises and ended up taking 31 to all parts of the world. Jeanette was very proud to be a member of the “100 Countries Club” since she had traveled to over 100 countries. Jeanette and Don made so many memories together through their travel and their family was always excited for them to return so they could hear the fun, colorful stories of their trip that Jeanette loved to tell! Their house was filled with many special souvenirs and items that represented all the places they had traveled. Jeanette was a happy, energetic person who was the life of the party and she never met a stranger! Her non-stop talking was just a signature characteristic of her! She made everyone feel important and special and always wanted to know all the details of whatever was going on in their life. She was a friend to many and cherished those friendships. She will be greatly missed by her surviving family: Her husband, Don, her daughters, Lynn Archibald (Bob) of Broken Arrow, OK and Karen Rodden (Steve) of Muskogee, OK Her six grandchildren who she was very proud of - Matthew Archibald (Emily), Mark Archibald (Audrey), Jodi Sherwood (Chris), Amy Jones (Shane), Layne Rodden and Scott Rodden Her seven great grandchildren (GiGi Ma) to them!) Kinsleigh, Ellie, Paisley, Payton, Kalie, Parker and Tate

Jeanette Pearl Creely, 90, of Tulsa passed away on April 1, 2021. She was born December 26, 1930 in St. Louis, Missouri to Ed and Marie Busse who preceded her in death. Jeanette grew up an only child in Richmond Heights, Missouri. She graduated... View Obituary & Service Information

The family of Jeanette Pearl Creely created this Life Tributes page to make it easy to share your memories.

Send flowers to the Creely family.