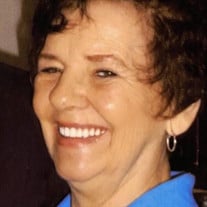 Jeanie Arlene Ramsay made her debut in Hayward, CA on May 16, 1941, as the only daughter to Paul and Myrtle Ingram. Soon after her birth, the family relocated to Oklahoma, where they planted their roots in Sand Springs. Jeanie often referred to herself as a CIO, “California Improved Okie.” Jeanie wore many hats throughout her life-- daughter, sister, wife, mother, friend, and talented artist. Without a doubt she would say that her finest of all hats worn was being a mom to her girls. Jeanie married her best friend, Phil Ramsay, on June 3, 1977 in Tulsa, OK. Together, they enjoyed life and many travels as they explored the US, showing off their Indian Art talents at various trade shows and powwows. They made many friends and took pride in the products they worked hard to create. They loved seeing their creations bring happiness to their customers. Jeanie loved her family with all her heart and no one who stopped by to visit was safe from hearing all about her family and what they were all up to. Sharing and storytelling came naturally to Jeanie and she was an interesting conversationalist, to say the least. What some may not know, is how strong of a woman she really was. After losing her best friend, Phil, in August of 2015, Jeanie battled with depression like never before. Despite her struggles, she pushed through and was able to let go of a few things that kept her from living her best life. A healthier lifestyle bloomed and her interests and love of art started to flow back into her life. It was one of her best seasons. Jeanie would surprise us all once again when in the spring of 2019 she was diagnosed with lung cancer. She drew strength from the Lord and on the wings of prayers said by her, her family and friends, she started her battle to win over cancer. She kept a great attitude and never feared her future. She would tell everyone that she was leaving it in God’s hands and that she wasn’t afraid. She demonstrated to all of us how faith is made stronger in trials and that strength comes in many forms. Her ability to model such faith, strength and courage during that time is now part of the legacy she leaves behind. She gave a gift of hope amidst her trial. She was a warrior and she knew the Lord—and she is home! Jeanie was preceded in death by her parents, Paul and Myrtle Ingram, brother Jim Ingram and wife Barbara, sister-in-law Virginia Ingram, and husband, Phil Ramsay. Jeanie is survived by her brother, BJ “Billy Jack” Ingram, two daughters, several grandchildren and great grandchildren, as well as many nephews and nieces, grand and great alike. Penny and husband Devern Rodocker of Cleveland, OK; Debby and husband Scott Moore of Inola, OK; Grandson Dustin Chadwell and wife Jessica; granddaughter Amanda and husband Brad Harmon; grandson Greg Rodocker and wife Teresa; grandson David Rodocker and wife Yessica; grandsons Jake and Cody Moore, and granddaughter Kristen Harris. Great grandchildren Darian Chadwell, Evelyn Harmon, Eleanor Chadwell, and Abigail Chadwell. If we only had one sentence to describe Jeanie it would be… She loved… was loved… and will be dearly missed. Visitation will be held on Monday, August 30 from 4p-6p at Floral Haven Funeral Home. Funeral Services will take place at 10am on Tuesday, August 31 at Pleasant View Baptist Church - 2243 S 426 Rd, Pryor, OK 74361

Jeanie Arlene Ramsay made her debut in Hayward, CA on May 16, 1941, as the only daughter to Paul and Myrtle Ingram. Soon after her birth, the family relocated to Oklahoma, where they planted their roots in Sand Springs. Jeanie often referred... View Obituary & Service Information

The family of Jeanie Ramsay created this Life Tributes page to make it easy to share your memories.

Jeanie Arlene Ramsay made her debut in Hayward, CA on May 16,...

Send flowers to the Ramsay family.