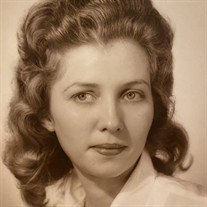 Jeaunelda Marilyn Jones gained her reward on February 6, 2020 as she passed away peacefully in her daughters home on to her divine Heavenly Home. She was born on July 13, 1936 in Tulsa, Oklahoma to Leo Thomas Williams and Mamie May Saltzman Williams. Jeaunelda was the middle child out of 11 children. She was the most gorgeous, kind, ornery, thoughtful, Godly woman this side of Heaven. She was strong-willed, decisive, and independent. She loved her family very much. She enjoyed cooking for her family, her specialities being chicken and dumplings, potato salad, dressing, biscuits and gravy, and the grandkids favorite; her chicken casserole. She always had a fridge full of the best ice-cold Pepsi and snacks. She never wanted anyone to go home hungry. She enjoyed singing, inviting people to church, and telling all of Jesus. Jeaunelda’s love of her life was Billy Gene Jones. Jeaunelda retired from Dover corporation, after 15 years in the shipping and receiving department. Prior to that, she worked at PSO for a period of 15 years. At work, she was known as “Mrs. Coffee.” She would often say “Well that’s keally rute,”, “Here we go, singing in the kitchen”, “I love you, a bushel and a peck.”, and “It’ll all come out in the wash.” If you knew Jeaunelda, you instantly felt loved by her. Jeaunelda was preceded in death by her parents, Leo and Mamie Williams; Brothers Melvin Williams, Eldon Williams, Gene Williams, and Ronnie Williams; Sisters Reeda Webb, Faye Boyce, Jaqueline Miller, and Leota Morey; Sons Lennie Jones, Mike Jones; and daughter Sherrie Hartman. Jeaunelda is survived by her daughter, Kindall Feeback and husband Wade Feeback of Sapulpa, Oklahoma; Son in law Larry Hartman, of Sapulpa, Oklahoma; Sister Velda Timmons, and Brother Ermol Timmons of Tulsa, Oklahoma; Grandchildren Jennifer Million, Lori Jones and husband Shawn Jones, Mike Jones Jr., Miranda Jones, Chandler Feeback, Lexy Feeback, and Brandon Feeback; Great Grandchildren Hayden Million, Corey Jones, Camryn Million, Madison Jones, Sophie Jones, Ella Jones, Livi Jones, Morgan Jones, and Bree Jones, and a host of many nieces, nephews, family, and friends. We want to extend our thanks to Grace Hospice and Emerald Memory Care for taking wonderful care of our precious Mother, also known as Nana.

Jeaunelda Marilyn Jones gained her reward on February 6, 2020 as she passed away peacefully in her daughters home on to her divine Heavenly Home. She was born on July 13, 1936 in Tulsa, Oklahoma to Leo Thomas Williams and Mamie May Saltzman... View Obituary & Service Information

The family of Jeaunelda Marilyn Jones created this Life Tributes page to make it easy to share your memories.