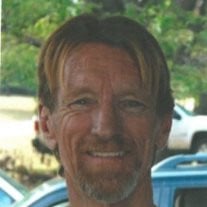 Jeffrey Thane JonesJeffrey was born March 8, 1958 in Beaumont, Texas. His family was transferred to Bartlesville, Oklahoma later that year, and then moved to Summit, New Jersey in 1961 where he attended grade school. In 1970 the family moved to Tulsa and Jeffrey attended public school, completing his education at Edison High School in 1973. He spent one summer in 1979 working for WilBros Engineering and Construction Company in Bolivia, S.A. Shortly after his return home, he enlisted in the U.S. Marine Corps, was last stationed in Camp Pendleton located in California. He married Lori Shinn in 1980, and his son Adam Ryan, was born in early 1983. After his discharge Jeffrey worked at several type construction jobs, finally settling on that of a finish carpenter. He enjoyed this avocation and took justified pride in his finished work. He and Lori were divorced, and in 1996 He married Lisa Swenning. Their daughter Chelsea Laine was born the following spring. Jeffrey is survived by his wife, Lisa, their daughter Chelsea, Sons Joseph Swenning and Adam R Jones, his wife Rachel and two beautiful granddaughters, Addyson, and Annslie. He is also survived by his parents, Mr. and Mrs. Vernon T. Jones of Tulsa; his brothers Michael and his family of Tulsa, and Vernon T. Jones Jr. of Houston, TX and his family. Jeffrey was very proud of his service in the Marine Corps, and displayed their emblems in his everyday life. He also loved to fish, shoot for enjoyment, bird hunt, play guitar the best he could and ride his Harley. He was able to take a couple of long distance bike rides these last few years and really enjoyed the open road and the Oklahoma landscape. Jeffrey celebrated 15 years free from alcohol before he passed. He was an active member in AA. He spoke at meetings whenever asked and sponsored many of the new members. He was always willing to help no matter what. Jeffrey loved his friends and family very much and wanted nothing more than to see people love one another no matter our differences. He will be missed terribly but not forgotten. A loving son, father, grandfather, and friend. You are the best man weâ??ve known.

Jeffrey Thane JonesJeffrey was born March 8, 1958 in Beaumont, Texas. His family was transferred to Bartlesville, Oklahoma later that year, and then moved to Summit, New Jersey in 1961 where he attended grade school. In 1970 the family moved... View Obituary & Service Information

The family of Jeffrey Thane Jones created this Life Tributes page to make it easy to share your memories.