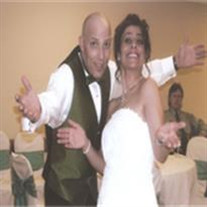 On February 15th, 2011, Jerry passed from this earthly life to be with The Father in Heaven.Â He passed away after a brief and courageous battle with cancer that took him too fast and too soon.Â His family and friends are saddened by our loss, but strengthened by the comfort of Jesus promise of eternal life with Him.Â We are certain of Jerryâ??s faith in Christ as his savior, and know that his body has been made new.Â For those who new Jerry, we knew him as a man of many talents.Â He was great at all of the roles in his life, including son, husband, dad, friend, co-worker, accomplished musician, martial artist, fisherman, football player, cheerleading coach for his daughter, and golfer, just to name a few. Â But more than anything Jerry was a great friend, a passionate and sincere friend who lived with authenticity and honesty.Â No matter where he was, a new friend was just around the next corner. He loved people and they loved him, and he had friends all over the world. Â That passion for people was the cornerstone of Jerryâ??s life and his gift to us. Â Â  Â  Jerome (Jerry) Jay Naifeh was born March 19th, 1956, in Tulsa to Bennie and Matilda. He is survived by his wife Joumana of Tulsa, children Paul and Kendall, his sister Bonnie, as well as many cousins, nieces and nephews.Â Jerryâ??s two children, Paul and Kendall, were the light of his life. He adored them and was always there to share and help them with lifeâ??s decisions, and to make sacrifices in his life so they could have what they needed.Â Jerry and Joumana were married in April, 2007, having found each other through amazing circumstances and friends who knew them both.Â After meeting Joumana, Jerry knew she was the one and they were married and began their new life together in Tulsa.Â Joumana brought great joy to Jerryâ??s life through her love, beauty and grace.Â She shared Jerryâ??s sense of humor and restored his passion for marriage through sharing the rest of his life with her.Â Joumana truly was the love of his life.Â We all marveled at the ease with which Jerry and Joumana integrated their new lives together.Â But, we all new there was an ingredient that was the cornerstone of their relationship â?? their love for and their enjoyment of each other â?? they were friends and lovers, and it showed when you were with them.Â  Jerry attended Edison Junior and Senior High and was known by all.Â He was well known for his quick wit and sense of humor, and his friendships spread across all groups.Â Jerryâ??s sense of humor was legendary as he saw the world through a different lens than the rest of us, finding humor in the simplest things, and always ready with a response.Â A childhood friend recently stated, â??If Jerry said something funny in the morning, everyone else was repeating it that afternoon.â?Â  Â  As an adult Jerry became even more focused on his musical talent and developing himself as a top-notch drummer.Â His natural talent and work ethic led to an opportunity to tour with a band that traveled internationally.Â His skills continued to develop after retiring from touring and he became a fixture with the top bands in the Tulsa area.Â Another passion that came along in Jerryâ??s life was karate.Â He and his dear friend, Tim, decided to begin taking karate lessons, eventually reaching the level of black belt.Â Â Â  Â  As talented as Jerry was, it was his passion for people and authentic relationship that defines Jerryâ??s life. Â A conversation with Jerry was passionate and energized, with his sense of humor sprinkled in along the way.Â He had the ability to connect with you very quickly and you soon felt as if you had known him for a long time.Â He saw through our flaws and found a quality in each of us that he could draw out, and he was never afraid to sprinkle in humor to soften or change the moment.Â We will all miss Jerry and his unique and important view of the world that he brought to each of us.Â The music in heaven is now more beautiful than ever.Â With eternal love, Your Family and Friends.

On February 15th, 2011, Jerry passed from this earthly life to be with The Father in Heaven.Â He passed away after a brief and courageous battle with cancer that took him too fast and too soon.Â His family and friends are saddened by our loss,... View Obituary & Service Information

The family of Jerome Jerry Naifeh created this Life Tributes page to make it easy to share your memories.