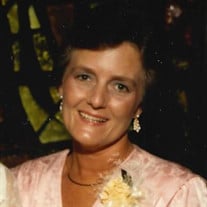 JERRILYN MULLEN Jerri was born Jerrilyn Kay Spellman on March 29, 1942 in Lima, Ohio to Howard and Verda Spellman. She passed from this life on February 5, 2022 in Broken Arrow, Oklahoma following a long battle with Alzheimer’s disease. She was the youngest of three children, and her parents owned a fine furniture store in Lima, with an oversized apartment above the store where they lived. As a child, Jerri enjoyed spending time with her beloved Aunt Velma, who doted on her with shopping, matinee movies and sleepovers. She also developed a love of reading, actually winning a city-wide reading contest in elementary school. Throughout her life, she always had a book, often reading two or three at the same time. She had many favorite authors, but especially enjoyed murder mysteries. She met her future husband, Jack Mullen, in high school while attending Lima Senior High. They married on February 11, 1961 at the ages of 18 and 19. Their young family grew quickly with the addition of three children. Forever an animal lover, there were always dogs and cats included in the family. Over the years, they would also include fish, birds, hamsters, guinea pigs, turtles, a rabbit and even a horse! The family had the opportunity to live in various states through the years, including Ohio, Massachusetts, Indiana, Louisiana and finally Oklahoma. While living in Wooster, Ohio in the early 70’s, Jerri became involved with the start of the local Humane Society. As fundraising began for a shelter, she opened the family home to foster all the cats and kittens waiting for forever homes. As could be expected, the love of animals was passed on to her children as well. Jerri held a variety of part-time jobs while the kids were young, waiting until they were older to work full-time. She became a secretary at the Williams Plaza Hotel (now the Hyatt Regency) in downtown Tulsa while it was still under construction in the late 70’s. She loved working at the hotel, eventually becoming Executive Secretary to the General Manager. She was also an active member of Executive Women International, which provided numerous opportunities for travel. Becoming a grandma was her greatest joy, spending time doing all sorts of activities with her grandchildren. Summers were spent doing crafts, swimming, and visiting local attractions. During the school year, she patiently waited outside school or at bus stops to get the kids safely home. She was also an awesome homework helper! Jerri is preceded in death by her parents, Howard and Verda, sister Joan Sharp, and brother John Spellman. She is survived by her husband Jack, daughter, Amy Graver, of Tulsa, daughter Megan Michie and her husband Jim, of Tulsa, son Mike Mullen and his wife Melissa, of Bixby, as well as her five grandchildren, Laura, Brian, Zoey, Abby and Emma. She is also survived by her sister-in-laws Vicky Mullen and Nancy Spellman, as well as many nieces and nephews. The family would like to thank the staff of Brookdale Memory Care in Broken Arrow for their many years of care and compassion to Jerri and her family. In lieu of flowers, gifts to honor her memory may be made to the Alzheimer’s Association or your favorite animal charity. Live-streamed Memorial Service to be held at 12:30 p.m. on Friday, February 18, 2022, from Floral Haven Funeral Home. If you are unable to attend the service webcasting is available at this link https://webcast.funeralvue.com/events/viewer/69085/hash:10DA48B68D3EBA2E

JERRILYN MULLEN Jerri was born Jerrilyn Kay Spellman on March 29, 1942 in Lima, Ohio to Howard and Verda Spellman. She passed from this life on February 5, 2022 in Broken Arrow, Oklahoma following a long battle with Alzheimer&#8217;s disease. She... View Obituary & Service Information

The family of Jerrilyn Kay Mullen created this Life Tributes page to make it easy to share your memories.

Send flowers to the Mullen family.