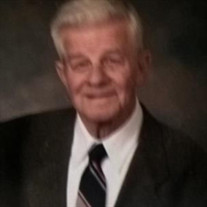 Jerry Wayne Barber passed away early Saturday morning, April 4th. He was 83 years old. Born in Bates, Arkansas on October 7, 1936, Jerry later moved to Tulsa with his family. He graduated from Central High School in 1954. He spent most... View Obituary & Service Information

The family of Jerry Wayne Barber created this Life Tributes page to make it easy to share your memories.

Send flowers to the Barber family.